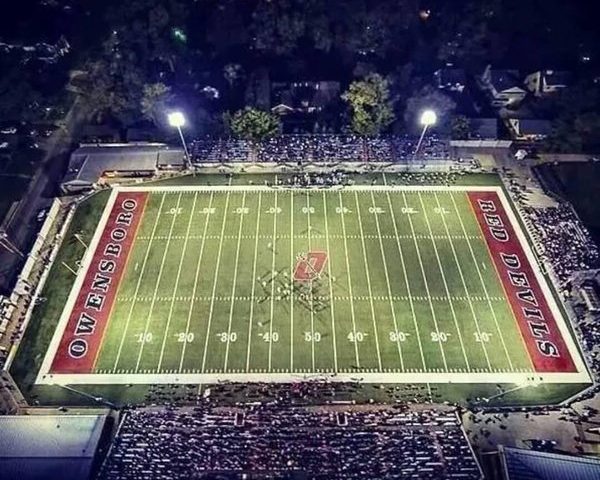 This week we look at Class 5A. We will continue on this march on up toward the ’21 season openers.

As for Class 5A, here is how we see it. Feel free to disagree.

The Red Devils return the top rated QB in the commonwealth and a player already committed to Rutgers in Gavin Wimsatt. Wimsatt was 145 for 235 with 26-TDs and 10-interceptions in leading his team to the finals in ’20. He passed for 2070-yards and ran for another 408 (80-carries) with 6-rushing TDs.

Many along the offensive front return including a player considered the top-rated freshman OL in Kentucky a year ago. Jak Lindsey (6-5, 280), who has already been offered by Kentucky, is the kind of cornerstone around which to build an offensive line. He’s a class of ’24 prospect, so he figures to be around quite a while. Sorry, first district, he will be a pain to contain.

Leading rusher, Ethan Avery, graduated but ’22’s Taquan Robinson looks poised to seize the reins. Robinson didn’t get but 23-carries a year ago but carried four of them over the goal line.

Look out for Kenyatta Carbon (’23). He averaged 16.2-yards per attempt in ’20 and scored a TD about every 4th-carry. He’s been a primetime player since middle school. We believe his time has arrived.

Khalil Rogers is the leading returning receiver, post-graduation, and Rogers caught 26-balls a year ago. He was just a sophomore then, like Carbon, and he is another top ’23 guy ready to shine. He looks to be poised to be Wimsatt’s top target in ’21.

We’re big on promoting football’s third-phase as it will win you games, count on it. Well Andrew Lanz is as reliable as a PK comes. He was an automatic 63 of 64 in ’20 on PATs.

Defensively, Maurice Moorman, class of ’22, is a big playmaker who is always around the football. He recovered 4-fumbles in ’20, forcing one, and led the back-third with 5-interceptions collecting 80-return yards and a pick-six along the journey.

Class of ’22’s Javius Taylor is also back and he only got 9-games of run in ’20. Taylor still had 4-picks and a fumble recovery on his ledger by year’s end.

Leading tackler, Austin Gough, has moved on to UK, but not before setting the career tackle’s mark at Owensboro. Guys like Gough are never actually replaced. However, Sahvon Hines is as good as they come along any front and Owensboro is not out of “Goughs” as Austin’s brother, Ethan Gough (’25), enrolls in 9th-grade fresh off being one of the very finest performers in the middle school ranks.

As for Sahvon Hines, the ’23 two-way lineman, projected to play DL at the next level, had 72-tackles, 6-TFLs, and 4-sacks, while recovering a fumble in ’20. That is the type performance which will only get better with physical maturity.

Hines will be a junior this coming year. His numbers will explode.

Jeremia Goodwin proved himself a defensive weapon in ’20 as the ’23 prospect had 5-sacks and 9-TFLs from his LB-post. He won’t make the Red Devils completely forget Gough, but he goes along way toward instilling confidence in that level of defensive play.

Frederick Douglass routinely has more Division I talent on its roster than any other school in Kentucky. So exactly when are the Broncos going to put it all together and grasp that elusive Kentucky 5A Championship. Who knows? Maybe it will be this year.

Samuel Cornett (’22) is back after a big junior season. Cornett completed 102 of his 153 attempts for 1,565-yards passing with 26 TDs against only 8-interceptions in 9-games. Cornett has the ideal frame (6-7, 220) for the “big boys.” He looks to have a tremendous second season at the helm of a potent Bronco offensive attack.

Dane Key (’22) returns at WR and he is widely considered the finest player at his position in Kentucky. Matter of fact, he may be Kentucky’s very top-rated player and a “Mr. Football” candidate. Key had 37-receptions in ’20 for 625-receiving yards with 11-TD receptions.

Cameron Dunn (’22) will have to replace some of Dekel Crowdus’ production from a year ago. Dekel is a UK Wildcat now.

Cooper Ranvier (’24) was the top freshman kicker in all of Kentucky football a year ago. He was 30 of 34 in PATs and among the leaders in scoring. Not too bad for a ninth-grader!

Ty Bryant is one of the marquee DB’s in Kentucky’s ’22 class. He led the team in tackles a year ago and pitched in both a TFL and an interception for good measure. Isaiah Kenney led the team with 3-picks and he was just a sophomore a year ago. The ’23 prospect is back and scored one of the team’s two “pick-sixes” in ’20.

Caden Johnson (’22) is a second level playmaker. Johnson had 4-TFLs, a QB-sack, and the team’s only “scoop and score” among his 2-fumble recoveries.

Losing Kwahlie Coffman, Israel Tshiunza, and Romarion Warner from off of last year’s defensive front will leave some holes in the run-box. This will have to be adequately addressed.

Look for Obadiah Commodore to be counted on to step-up his efforts from a year ago. Jamarrion Harless is a young guy (’23) who made his appearances count. Four of his 13-tackles were behind the line and he threw in a QB-sack for good measure.

Many people will be critical of our not picking Bowling Green in our top-5. First of all, at the magazine we don’t pick teams in our preseason top-5 who we don’t believe can get out of round two of the playoffs.

For those of you who want to criticize, you need to go over BGHS’s roster from a year ago and analyze the production which either graduated or transferred to a private school in Tennessee. It will boggle your mind.

We believe South Warren comes out of district two in ’21. Sure, they lost to the 5A Champs in round two last season 41-24, but they beat them in the regular season, 10-7. They were a long way from not being competitive with the top of the classification.

WR, Christian Conyers, c/o ’23, returns and he was the leading receiving, yardage wise, in ’20 and tied for the club lead in TD-receptions. Conyers has shown up on some preseason All-State projections and is being as heavily recruited as any kid in his class. Leading rusher/scorer, Kobe Martin, ’22, also is back for another go-around.

On defense, Luke Burton figures to be one of the better LBers in the 5A classification. Burton, a ’22 prospect, had 63-tackles in 7-games with 13-TFLs and 5-QB sacks. Check this out, he picked-pff a couple passes to go along with everything else.

Avrin Bell was the leading pick-off, third-level artist a year ago and he is a ’22 as well, so we will be seeing him. William Trussell was a ’23 prospect who picked him a couple passes a year ago also returns to fortify the back-end. Trussell had 3 TFLs and a QB sack in ’20.

Quick, someone tell me the last time Covington Catholic didn’t challenge for the title in its classification of play. Yeah, that’s what we thought.

The simple matter is, the Colonels are always in the discussion. The same will be true this year.

The Colonels lost most of its offensive production from a year ago. We are sure there is talent on the way. However, we don’t really cover JV football so we are unaware of whom these guys might be.

There is one JV guy from a year ago who caught our staff’s attention. We were informed on him largely because of his abilities as a wrestler. His name was and still is Willie Rodriguez.

We are high on Rodriguez. We believe he is a ’24 guy steaming toward the varsity roster and Friday night glory.

He projects to play TE/LB and is in the mold of some other greats who have adorned this fine program at that particular positional couplet. Ever heard of Michael Mayer?

For the Colonels to get in contention, with the offensive losses it suffered, it will have to have the defense come up big early until the younger guys get their “sea-legs.” Aiden Jones is a ’23 LBer who has proven he will be one of the more recruited players at that position in Kentucky.

Jones had 52-stops, a FR, 4 TFLs, and a sack in ’20. David Sullivan will be around to help with the heavy lifting. Sullivan, a ’22 guy, was fourth on the team a year ago in tackles, recording a TFL, a sack, and an interception.

The top pick-off artist from the Colonel third-level, Zion Mason, returns. He not only tied for the club lead in interceptions but he recorded one of the two “pick-sixes.”

These guys will find their way into the mix as the year wears along. We must admit, if they didn’t have “Covington Catholic” across the front of their jerseys, they wouldn’t be listed among our preseason top-5.

This is a pick which will surprise some people. Like our pick of Paducah Tilghman in 3A, we will look like geniuses or dunces once the season begins to unfold. We can’t stress enough, and we reiterate here, that neither label scares us.

Woodford County has some fine young talent. They also have one of the better coaching staffs in the classification. “WoFo” got better every game a year ago.

We think they get by Madison Southern this year. We believe they punch their ticket to the Regional Championship game at a minimum.

QB, Bryce Patterson returns and the ’22 prospect had a quality year. Patterson threw for more than 1,000-yards and was the team’s second leading ground gainer.

Patterson contributed to 16-TDs being scored a year ago, either running or passing. Andrew Nason is a ’24 prospect who is a polished QB protégé and may be the QB of the future there. Until then, the ’24 prospect whose action was limited by injury a year ago will be a stalwart safety. Nason is a name you might just write down for future reference.

Every team covets a “big time” running-back returning. We believe Preston Stacy (’22) would have to fit that bill.

Stacy gained 1,014-rushing yards in only 7-games in ’20 with 13-rushing TDs in only 140-attempts. Running-backs who can average close to 150-yards a night, and a couple of rushing TDs per outing, can cover over a lot of what is wrong on a ton of high school rosters.

Jackson Geilear is a change of pace in the backfield who came up “Aces” in ’20. The ’22-prospect gained 331-yards and scored 5-rushing TDs on only 35-carries a year ago. Geilear is really a defender as you will shortly discover, so his offensive contributions “hit the spot” for Dennis Johnson’s ball club.

All told, “WoFo” returns 25 of the team’s 28 rushing TDs from a year ago. Geilear was also the second leading receiver.

Joey Whitehead at PK graduated in the Spring. However, in Sayer Ford, Woodford County boasts one of ’23’s very best weapons at the PK slot. He was 10 of 12 in ’20, converting 83.3% of his attempts as only a sophomore.

Grant Garrison is one of the more productive DL stars in the ’22 class. The OL/DE combo player had 11.5 TFLs (2nd on the team) and led the squad with 7.5 QB-sacks among his 29-stops recorded screaming off the edge. Imagine that, Dennis Johnson able to train, cultivate, and develop a top-flight performer at the DE position.

Jacob Jackson (’22) and Kenyun Maxberry (’23) both return in the defensive backfield and the two of them had two of the club’s three picks a year ago. We think Andrew Nason (’24) will play at one of the safety slots until the time comes to see what he can do under center.