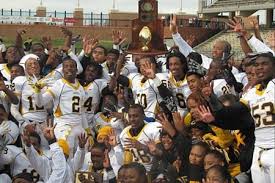 As promised, after the polls closed last night, the selection committee at KPGFootball met and comprised a list of offensive players for the Middle School All-State offense. Some of these All-Staters have been slotted where we project them playing, next level, and not necessarily where the MS team slotted them. Many of these players were two-way stars and could have been slotted on defense as easily as on offense.

For some reason, we didn’t have too many offensive linemen nominated. In stead of sacrificing any quality, we just anointed the three linemen we felt were no-doubt, All-Staters. Most of the linemen we had nominated were defensive guys.

When we release the defensive team tomorrow, you will see some defensive linemen who played offensive line too and at an All-State level. We didn’t want any of the nominees to be awarded on both sides of the football, though many of them rightfully could have been because of our desire to recognize as many of these nominees as found deserving.

Without further adieu, this is the KPGFootball, All-State Offense…

QB- Joshuah Keith, Todd County Middle School, 5-10, 165-pounds. Keith was the KYMSFA Regional Player of the Year and quarterbacked Team Kentucky Future Stars to the win over its Tennessee counterpart this past summer in Clarksville, Tennessee on his way to winning the Offensive MVP. He is the top rated QB in Kentucky’s 2024 class of prospects and its top-rated, overall, football player.

QB- Cole Hodge, 6-1, 165-pounds, Christian Academy-Louisville. Hodge is quite a football player who is really quite an impressive athlete in a variety of sports. Both Keith and he have taken turns being considered the “best QB in the 2024-class” and now, with Keith moving to the Knoxville, Tennessee area for his high school football (Clinton HS, Clinton, Tennessee) the mantle falls to Hodge and Hodge alone. Hodge, who played at North Oldham Middle School this season, has transferred to the Christian Academy-Louisville and is already starting at guard for the varsity men’s basketball team. He hasn’t come to CAL for basketball. Get ready Centurions, this is your starting QB for the next 4-years, book that! Hodge is a fixture on Team Kentucky rosters and has been for years. Played for Team Kentucky Future Stars 7th-grade squad when still a 6th grader and rising seventh grader was the game’s Offensive MVP, that year. This year’s future stars game should pit Hodge (KY) and Keith (TN) against each other. Won’t that be fun to watch!

WR- Jordan Miles, 5-11, 165-pounds, Trigg County Middle School. Here is an eighth grade kid who is one of Trigg County High School’s highest average scorers on its men’s varsity basketball team, right now. This kid played QB at Trigg this season but that was mostly owing to the desire to have the best athlete touch the football every play, a common strategy in middle school football. He may well end up a QB in high school, he can sling-it. However, he projects to WR on the college level. We have put him at WR for purposes of this All-State team. This kid is one of 2024’s best pure athletes and has made both Team Kentuckys, FBU and Future Stars. He is a fixture on any Team Kentucky roster at the commonwealth-level. Easy selection.

WR- Felix Jackson, 5-11, 155-pounds, Fulton County Middle School. This kid is just one example of the talent coming from the middle school ranks and onto the varsity roster which has morphed the perennial doormats in Class 1A, Fulton County, into a team to be feared in the classification under the coaching of James Bridges. Bridges has had this kid in the weight room already and it showed dividends with his play this year in the backfield at RB for the Middle School in Fulton County. This kid has a long frame and he is super athletic. KPGFootball believes Jackson’s future at the high school level and beyond is out wide or even the defensive backfield where his vertical explosion and length can be put to excellent use protecting the Pilots’ back-end. Regardless, this kid belongs on this team. Remember from where you heard of him first.

WR- Santana Crayton, 5-8, 163-pounds, 10th Street Cardinals. Crayton has played on numerous Team Kentuckys, particularly Future Stars, and is widely considered the best player in the city of Louisville, which also happens to be the city which is home to Kentucky’s best athletes. This past year, Crayton accounted for 34 TDs, rushing and receiving, on his way to earning his league’s MVP. HIs team went undefeated and were the “Kings of the City.” This is a kid who may stay at receiver or could move to RB at the next level. If you are looking for a person like whom this kid plays, he reminds KPGFootball of Dekel Crowdus.

RB- Caden Bowling, 5-9, 150-pounds, Breathitt County. Caden made the KYMSFA’s All-Region team. This is a kid we haven’t seen out on the combine circuit and one which hasn’t done much outside of Breathitt County. We expect he will be getting out there more this summer as his high-school career is soon to embark. The KPGFootbll staff has seen him play quite a bit and we are quite sure of his belonging on this team. He is a North/South guy and waist very little time running to the sideline.

RB- Kenyatta Hardge, 5-11, 180-pounds, Caudill Middle. If you follow Team Kentucky FBU or Future Stars football this is a familiar name to you. He is also a guy who is a backfield star for a middle school team which may be the best middle school football team the commonwealth of Kentucky has ever fielded. Over his career, Hardge has gained 7,311 yards and scored 151 TDs. Enough said.

RB- Brady Hensley, 5-10, 165-pounds, Caudill Middle. The other half of the best backfield in KYMSFA football, Hensley isn’t quite the specimen Hardge is but one can’t argue with his production. Hensley, over the course of his MS career has compiled 7,234 yards and scored 153-TDs.

RB- Logan Rodgers, 5-11, 160-pounds, South Hopkins. This kids is a burner, averaged over 100-yards a game rushing and has represented Team Kentucky in multiple Future Stars and has played for the FBU team as well. Many consider him the best running back in the western end of Kentucky outside of Louisville.

TE- Jonah Adkins, 6-0, 190-pounds, Belfry Middle. We can sum up this kid in one anecdote. He was placed on the Future Stars’ team this past summer from off of the alternate’s list and had a tremendous showing. He ended up first-team at TE and really was an effective weapon for his team over the middle. He is the elite player at his position in Kentucky’s 2024 class. Missed a handful of games early in the season but returned to the lineup to score 9 TDs for his team from the TE slot, doubling as a FB. Averaged over 15-yards per reception and a crippling blocker as the offensive line’s “sixth member.” Plays both baseball and basketball too while maintaining a 4.0 GPA.

OL- Ethan Phillips, 6-0, 230-pounds, Highlands Middle School. This is a kid who is possibly the best interior offensive lineman in the middle school ranks. He didn’t play middle school football this year as he played up on the 9th grade team which finished 9-1 with him in the starting lineup. Ethan is a multi-sport athlete who plays basketball and also wrestles in addition to what he does in football. The kid already is deadlifting 300-pounds and squatting 225. He can play from tackle to center along the offensive front and plays NG on defense. He has a 3.2 GPA and is on the Superintendent’s Student Advisory Council. This kid is a definite, future star in the high school game. We are quite certain on this.

OL (Center)- Hayes Preston, 5-10, 190-pounds, Garrard County. Preston was impressive deployed along both the offensive and defensive fronts for the 8th grade team though only a 7th grader and being a mere 12-years of age. Garrard’s only conference loss this year was to Caudill Middle and we know the type of team they had. Preston was the OL Player of the Game at center for the “Blue Team” in the True-Talent All-American game in New Orleans and was selected to the Pro Football Hall of Fame Academy’s 7th grade Kentucky All-Star team. In the HOF Academy’s game, Preston started on both sides of the ball at OT and DE. Also played TE and MLB at the World Youth Championships in Canton, OH. Preston also plays basketball and baseball while maintaining a 4.0 GPA. As this kid matures, look-out.

OL- Jak Lindsey, 6-3, 290-pounds, Owensboro Middle School. Lindsey is just another name to add to the diadem of stars playing who have played in the country’s most prestigious middle school football game, hailing from Owensboro, Kentucky. He played center and nose-guard for Coach Brown for OMS with his deployment at center being out of necessity owing to his being the only front guy this year who could snap the football with any consistency. This kid is a Bret Cooper All-American and is a big frame guy with impressive size and length who looks like he will get even bigger as he matures. Lindsey moves well, has explosive power steps, good hand placement, and plays with good leverage for a big-man at his stage of development. If he continues to play offensive center, this is a kid who could break the lineup at Owensboro Senior High pretty early in his freshman campaign.

Athlete- Carter Conley, 5-9, 150-pounds, Johnson County. Why do we label this kid an athlete? Well, he is only one of Kentucky’s most versatile players in the 2024 class. Conley has played TE, HB, QB, PK, and punter all while playing for one of Kentucky’s elite programs at the MS level in Johnson County. This is a kid who will find the field at Johnson Central next year even though the Eagles have many returners from off its State Championship 4A football team. Conley is a Team Kentucky fixture both FBU and Future Stars.

PK Parker Friedman, 7th grader, 10th Street Cardinals, Louisville. Parker was 20-22 this season on PATs with one of the misses being blocked. He was the place-kicker for the Team Kentucky FBU team and for Team Kentucky Future Stars. He has made the 2019 USA Football team, the USA Middle School National Team, is a FBU Top Gun for 2019 and the Class of 2025’s MVP at the Pro Football Hall of Fame game where he made the 7th grade All-American first-team. Kentucky’s elite place-kicker in either the 2024 or 2025 classes. Tough to make this team as a 7th grader. Also a member of the Orchestra and Speech team at Kentucky Country-Day.

These are the point-scorers, tomorrow we will publish the stop-squad. This is Coach HB Lyon, reporting for KPGFootball, and we’re JUST CALLING IT LIKE WE SEE IT!