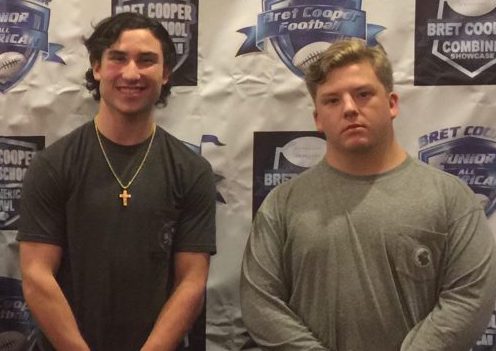 When delving through old photographs trying to find one with both Austin Gough (Owensboro Senior HS) and William Long (Breathitt County HS) pictured together, there were so many from which to choose. Truth is, there aren’t two better friends playing football anywhere in the commonwealth of Kentucky.

They were the first two features we published our first day online, March 30, 2017. The article we published, that day, about Gough was entitled “Not All Thoroughbreds in Kentucky are four-legged.” It is right under the photograph of Mr. Gough appearing to the right of this very paragraph. Look for blue-ink and an underline. You may wish to reread it, we love to reminisce.

Hopefully our writing has improved over some 1,400-articles written since (no offense to Fletcher Long, who wrote the articles and was our only writer in those days). One thing is clear, and was clear to us even then, and that is Austin Gough is a D-I football prospect and among the top players in his or any class at his position.

He has three offers now, 2 D-Is and a D-2. This is just the end of his junior year. He is far from done fielding offers.

William Long was the second player we ever featured. His feature was entitled, “Hopkinsville’s William Long.”

Okay, not the most imaginative of titles we will grant you (Note: Again, no offense intended toward Fletcher Long, I will probably catch some flack from Long here, but even he concedes writing titles isn’t really his thing) but he was just starting. William’s article is linked beneath his picture to the right as we did with Gough.

William, who we still believe to be a D-1 level prospect, athletically, certainly is an elite-prospect in the classroom. William has been offered by Bluefield College (NAIA), Hanover (NCAA, D-III), and Centre College (NCAA, D-III). Both Hanover and Centre College are listed among the top-50 or so Liberal Arts colleges in America and offer an education really second to none.

Bluefield boasts a mighty fine academic regimen and reputation too. We don’t believe the commonwealth of Virginia has any schools with academic offerings below Elite.

It is very rare for either NAIAs or NCAA, D-IIIs to offer prospects as early as William was offered by these three programs. We believe it indicates his being a very prominent target for all three programs and demonstrates William (like Austin) is an elite 2021-KY prospect at the positions at which he projects to play in college.

One thing appears true, for any higher-division school wishing to check William out and, potentially, to offer; William’s gaining eligibility from the Clearinghouse isn’t even in question. Austin’s grades and scores are also “no-doubters” for the Clearinghouse bestowing on Gough instant-eligibility clearance.

William is experiencing a late growth spurt. His stock as a prospect grows with him.

He projects as either an OC or NG/DT everywhere he is drawing looks. He has the speed and blunt-force-trauma inducing-type explosion to play FB/H-Back in run-sets too.

Yesterday, April 20, 2020, was a special day for this publication. It’s being special had NOTHING to do with smoking weed.

It was special because both Austin Gough and William Long were offered on the same day by two different schools. Gough was offered by one of the Ohio Valley Conference‘s elite teams, and its defending conference champion, Austin Peay State University. Austin Peay’s football trajectory has gone nothing but up in recent years and it now consistently, and perennially, challenges for the conference crown.

Long got a coveted offer for Bluegrass kids too as he became among the first, if not the very first, 2021-prospect to be offered by Centre College’s legendary coach, and all-time wins leader, Andy Frye. Centre College, considered by many to be Kentucky’s leader in academic reputation and ranking, is a coveted offer; especially for Kentucky kids. A degree from Centre (Same is true of Hanover, but they are in Indiana) means a lot in the Bluegrass, and to Bluegrass-ians (tip of the hat to Ogden Nash).

Now that we have gotten them offered on the same day, who knows? Maybe, for our next trick, we can get them offered by the same school. Wouldn’t that be something; if they were to get to play together in college?

That would be the perfect ending to this particular saga which we have travelled with both Gough and Long since the day the journey began. That’s the Hollywood-type stuff which is virtually no-challenge to write. If I don’t stop taking shots at Long’s writing ability; however, I may not be the one writing it.