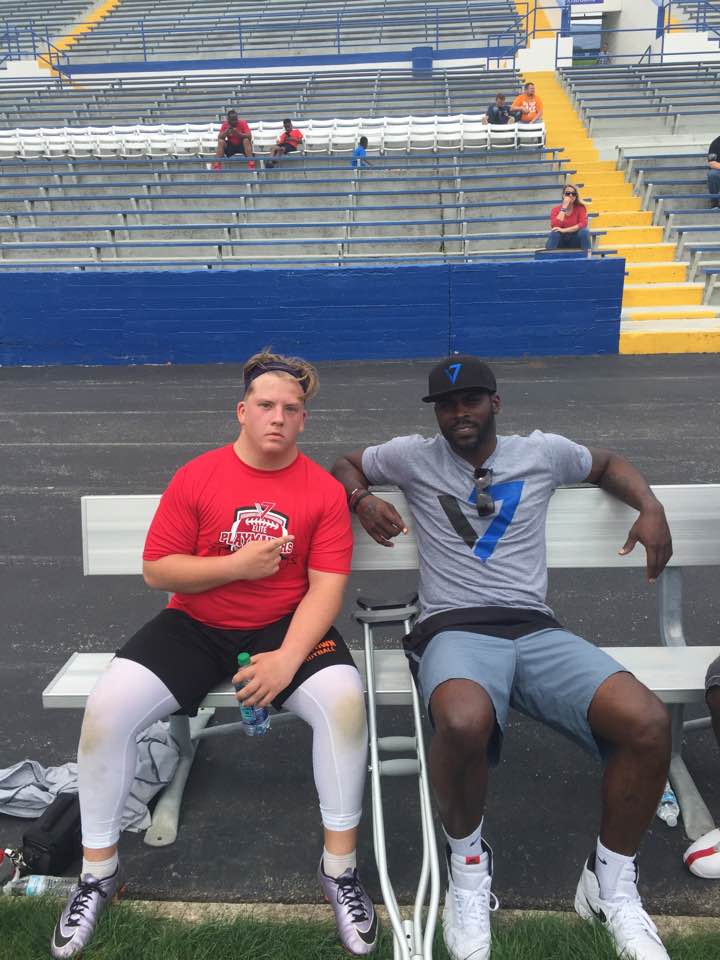 I had a college recruiting coordinator tell me that to play Division I College Football you had to have either elite size, strength, or speed.  Owensboro’s Austin Gough may have all three…so may William Long. William Long is unbelievably thick…I mean THICK. Standing just south of 5’10,” William weighs in the neighborhood of 250 pounds. William reps the college rep weight of 225 on the bench press an incredible 20Xs and has a one-rep, bench press maximum lift of 365 pounds. For those thinking he’s all upper body, William has easily squatted 515 and dead-lifted 485 pounds and power cleans 250 pounds. He is the reigning Kentucky Powerlifting Champion in the 250 pound weight class.

For speed, William played guard in an offense which pulled and trapped frequently, and on Defense, played MLB in HMS’ 4-3 alignment, routinely making plays from sideline to sideline in addition to his tackle to tackle responsibility. Can he play MLB, you ask, at 250 pounds? Well, the Bret Cooper All-American staff thought so as they selected him the JJ Watt Outstanding Defensive Player at this year’s All-American Classic in Dallas, TX.  The only questions concerning William is where will he top out height wise and at which High School will he play this Fall as William’s mother works for the School Board permitting William to choose between HHS and the Colonels at CCHS. Which ever power wins this two-horse race, the 4A HHS or the 5A Power CCHS, you can bet the HC at either will salivate over what a rising freshman like this brings to the table at the High School level.

William is a 2x selection to Team KY FBU, a 2X selection to the West KY All-State Team for the East-West KY Game, a 2X All-American, and, if he makes KY’s Future Stars Team this year, he will be a 3X participant in the Tennessee-Kentucky clash (he made TN’s 7th grade Future Stars Team as a sixth grader). William is listed by 4.0 Sport Media among its Top National 100 players for the 2021 class and has had articles written on him by both Youth-1 and 4.0 Sports Media.

Kentucky Prep Gridiron predicts William will join Austin and Jordan (The Big KY Three) in Clarksville, Tennessee for the Kentucky Future Stars in July and William will be hard to keep out of the lineup at either HHS or CCHS this Fall, in spite of being a freshman. Until we meet up again, remember…PLAY THROUGH THE WHISTLE!

KPG Epilogue:  William Long is playing his high school football for the Tigers of Hopkinsville High School and Craig The Silver Fox Clayton.  William was selected for the Kentucky Future Stars Team since this article was written, making him the only participant in the game’s history to play for both Tennessee and Kentucky. William Long has, as of the date of this edit to the article’s epilogue, started and played every offensive snap on HHS’ OL. William is responsible, as a freshman, for making the offensive line calls in the run game and pass protections. KPG has been informed by the coaching staff that, as soon as the weather turns more temperate, William will be pulling duty on both the offensive and defensive fronts.