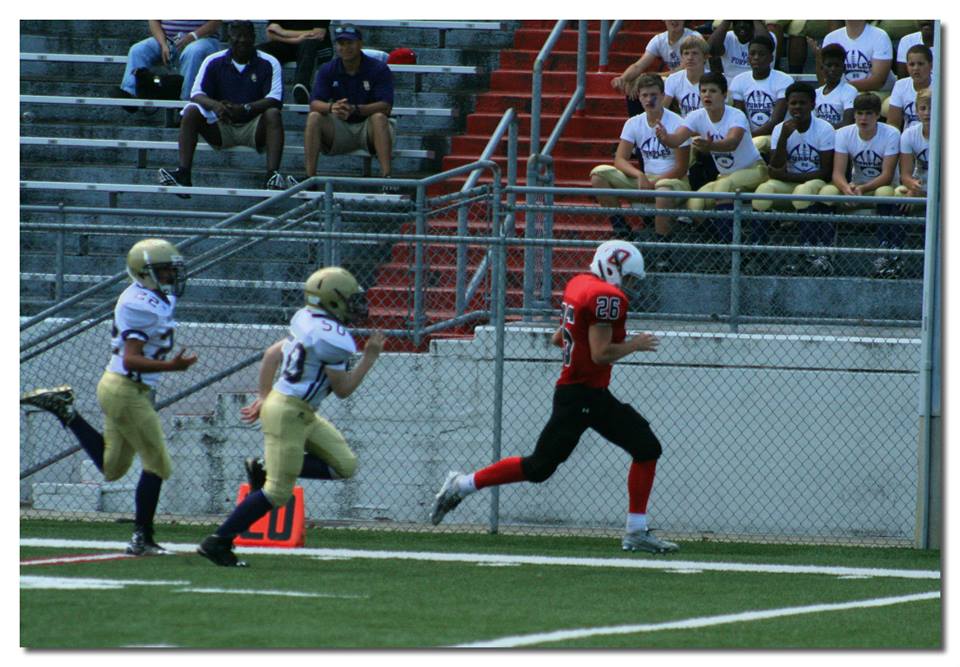 The Kentucky-Tennessee Future Stars Game is coming up later this Summer with the “Best of the Bluegrass” convening in Louisville, Kentucky April 9, 2017 and the following Sunday in Lexington to earn slots on what is the showcase event for rising 8th and 9th graders across the Commonwealth.  Leading up to that showcase, we want to feature some of the grid stars who will likely make the team for Ricco Hughes’ 2017 edition and, further, are likely to see significant playing time on Varsity rosters throughout Kentucky as freshman.

Owensboro, Kentucky boasts the finest middle school football program in the Commonwealth of Kentucky in this outsider’s opinion, bar none, which is probably why Owensboro Senior is perennially one of the best teams in 5A football.  Coach Greg Brown’s little “Red Devils” were no different this year and no team in Kentucky had a two-way stud any better than Owensboro Middle’s Austin Gough.  Gough, at 6’1″ and 190 pounds was timed under 4.8 seconds at the forty during the Bret Cooper All-American Combine (hand-timed) and is a triple-jumper in Track and can dunk a basketball, evidencing enough verticality to warrant the sub-4.8 running speed.  Gough also starred on the East All-American Team at OLB as well as gaining about 150 yards from scrimmage during the game from his RB position.

When discussing stud 8th graders there are three names in Kentucky which are virtually uttered by every knowledgeable person, William Long from Hopkinsville and Jordan Steele from Harlan, but neither of them have anything on Mr. Gough who has the right balance of freakish athleticism, length and size, speed and nasty (on full exhibition when he runs between the tackles or comes up to deliver the boom).  Austin has been selected for Team Kentucky FBU twice, invited to play in the East-West KY game and the East-West Bret Cooper All-American game in Dallas, TX where Long and he were Kentucky’s lone representatives.  There is no doubt in the minds of the gridiron staff here at Kentucky Prep Gridiron that we will see Austin Gough on the Kentucky Future Stars team in Clarksville, Tennessee and challenging for a starting birth on both sides of the ball for Owensboro Senior next Fall.

Kentucky Prep Gridiron predicts Austin Gough will be a Saturday player in the near future and remember…PLAY THROUGH THE WHISTLE!

KPG Epilogue:  Austin was selected as a RB to represent the Commonwealth of Kentucky in the Kentucky Future Stars Game in Clarksville, Tennessee June 17, 2017 at Fortera Stadium.  In the game he lead Kentucky to victory over Tennessee and, for his efforts, was awarded the game’s Offensive MVP.