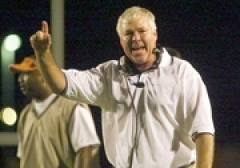 I am not sure exactly when this website will be live nor even when you will be reading this article.  I can tell you 4A Kentucky prep powerhouse Hopkinsville High School (HHS) will name a football coach March 31, 2017 @ 2:00 p.m. CST.  Please note that this article has been submitted the day prior to the announcement.  Please additionally note that the author of this article was not on the selection committee.

There were sixteen (16) applicants for the position of HC.  HHS is the 13th winningest football program in KHSAA history and has won two State Championships and has played for five others. It is a destination job at the High School level. Kentucky Prep Gridiron is going on the record before the announcement that we believe The Silver Fox…Craig Clayton will be named HC at tomorrow’s press conference.  What makes us so sure?

Well, to start, let’s look at The Silver Fox’s coaching record.  Clayton was 149-86 at Hopkinsville from 1987-2004 including 13 forfeits imposed by the KHSAA for using an ineligible player.  Without forfeiting those thirteen wins, Clayton, in 16 years at HHS previously, would have been 162-73, averaging 10 wins a season.  Clayton took HHS to the State Championship games in 1996 and 1997 in 3A at a time Kentucky only had 4 classifications.  Prior to coming to HHS,  Clayton went 16-7 at Todd County.  Clayton then went to Franklin High School in Tennessee and coached in Tennessee 6A football going 65-22 there and taking them to the Championship game in 2008.  Clayton most recently went 43-21 at Nashville’s Hillsborough High School taking the Borough’s to the 5A Championship game in 2014.  In toto, Clayton has gone to four Championship games at three schools in two states and amassed a 273-136 mark for a winning percentage of over .667.  That’s why he is a Hall of Famer; and that’s why he is the HHS next coach.

You see, it’s real simple…when the winningest coach in your program’s history applies for the vacancy at the High School he made into one of the premier programs in Kentucky…you give him the job.  You don’t need a curriculum vitae, you don’t need his interview.  So, Kentucky Prep Gridiron isn’t going out very far on a limb by welcoming The Silver Fox back to the Hopkinsville sideline.  Oh, that sound you hear…well, that’s the sound of sphincters tightening all over the Commonwealth.  Welcome back Coach Clayton and, remember to keep teaching your kids to PLAY THROUGH THE WHISTLE!

KPG Epilogue:  Coach Clayton was in fact hired at HHS and has amassed a tremendous staff and the Tigers at HHS figure to play a prominent roll, as they do perennially, in whom will factor into the race for the 4A State Title in the Commonwealth of Kentucky.