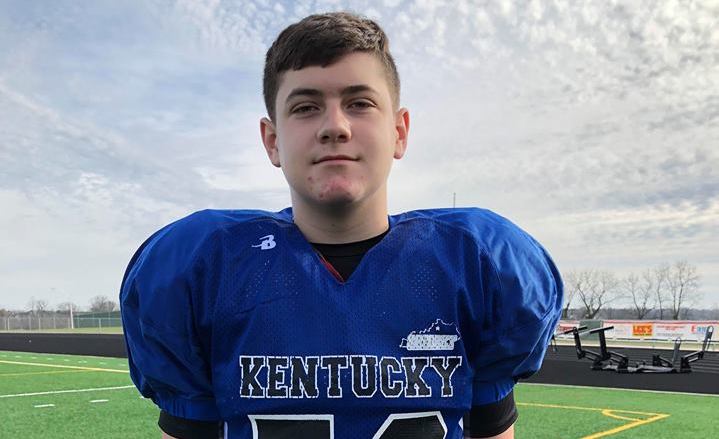 We have before reported on Jonah Adkins. Back in June of this year we published an article detailing what we thought was just an incredible performance at our All-State Mountain Combine. We wrote in that article…Jonah Adkins, at 5-7 and 150 pounds…ran both his 40 yard dashes under 6 seconds, 5.9 seconds and 5.8 seconds respectively. Both times are elite for someone primarily deployed defensively as a DE and secondarily as a TE on offense. Couple that with his running a pro-agility shuttle (5-10-5) of 4.81 seconds and this is a kid likely to scream around end next year before a…tackle is able to get out of his stance…Adkins is moving with a speed, quickness, and coordination of a much older athlete. The Buccaneer coaches had to agree with KPGFootball about Adkins extraordinary athleticism and mobility as they elected to move him to linebacker defensively and fullback offensively from where he had before been played.

Coming out of our Combine, Adkins went on to have the type of season we forecasted from his performance for us at Pikeville High School before the year even started. Adkins tried out for Team Kentucky FBU Elite and was selected but really couldn’t participate owing to other time constraints. FBU’s loss was the other Team Kentucky’s gain as Adkins did represent Eastern Kentucky in the East vs. West All-State Classic. Now when we said he played in that game we really mean he freaking played in that game!

The game was held at Frederick Douglass High School in Lexington, Kentucky. Now, in June we predicted with Adkins athleticism, quick-twitch burst, and spacial quickness he would be a problem screaming around end for a middle school offensive tackle. Problem appears to have been underselling it a bit. Jonah Adkins invaded the West Kentucky backfield, regardless of where the East deployed him, for 8 tackles, 3 QB sacks, and a defensive safety. This past season, in addition to what he contributed on defense, Adkins averaged nearly 8 yards per carry and rushed for approximately 600 yards from his deployment in the backfield at fullback for the Belfry 7th grade Buccaneers. How did Adkins perform defensively with the switch from End to LB? Well, glad you asked…he led the Buccaneers in tackles.

If you are wondering just from where all this football playing ability is coming, particularly the leading the team in tackles penchant, it might well be genetic. Jonah’s first cousin is Belfry High School’s Brett Coleman, whom we featured in an article published on this site back in September. Coleman, was a player about whom we believed, then and now, to be one of the best players in Kentucky’s Class of 2021 prospects. Coleman proved, this season, our evaluation of him was money and he was very deserving of being considered amongst the very best players across Kentucky in his graduating class. Coleman, for the HS defense, exceeded 120 tackles, and threw in 4 QB sacks, playing safety for the Pirates in 2018. Belfry High School finished this season 10-3, losing the Regional Championship to Boyle County in a game we were very pleased to attend at the CAM on Pond Creek.

KPGFootball was able to obtain from Jonah’s family a written statement concerning Jonah’s impression from having represented Eastern Kentucky in the East vs. West Game. Jonah’s family informed KPGFootball that…[Jonah] had an awesome time at the event which was both well coordinated and efficiently orchestrated. We hope, on Jonah’s behalf, he gets other opportunities to represent Eastern Kentucky in more events of the kind in the future. The fact this past Thanksgiving won’t be Jonah’s last opportunity to play in an event of the nature of the one in which he just played is something about which KPGFootball is quite sure and something on which we would be willing to wager significantly. I mean, why wouldn’t he get additional opportunities? He certainly made the most of this one!