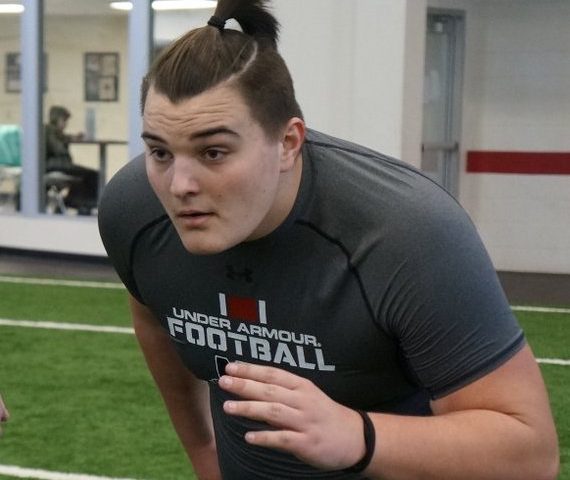 We first wrote about Austin Lawson on KPGFootball, May 22, 2108. For your convenience, we have provided a link to the article which you may access by clicking on the words in blue. At that time we wrote that article, the big fella was listed at 6-4. Since that article was published, we have seen Austin listed anywhere from 6-2 to 6-4. Having stood next to Lawson, we believe the 6-4 measurement to be more accurate. Regardless, he wears his 300 or so pounds very well, pulling it off without looking the least bit doughy. Austin just finished his career playing along the best offensive line in Kentucky, along side such stalwart high school stars as Ethan Woolford and Dagan Rash, but there are schools sleeping on this drive blocking juggernaut and we are going to see what we can do to stop this. Make no mistake, whether you wish him to align at guard or tackle, the three sport star (football, wrestling, track & field) is the type of athlete big-time programs need blocking for its backfield, assuming the program would like to either run or throw the football.

Austin, who wears number 73, and whose highlights are herein linked, has played on both sides of the ball for Belfry High School. Belfry, which finished the year, 10-3, losing to Boyle County in the Regional Championship, deployed Lawson at NG defensively. We believe you will find his defensive training has helped his offensive line play in several of the following ways. For starters, he plays offensive line, particularly in the run-game, very aggressively, littering the ground with defensive first and second level players inheriting mouthfuls of earth.

At KPGFootball, we also believe the defensive experience results in his playing with an extraordinarily low pad level as Lawson fires out and not up from out of his stance into engagement demonstrating excellent core-strength, hip-sink, and leg kick. We noted this in the May 22nd article where we attributed his playing nose for his low pad level and excellent leverage further relating…nose guards are consistently subjected to traps and double teams attempting to dig them out of the A gap. If nose guards stand up, instead of firing out, then they become easy targets for such tactics. In the world of offensive line play, we refer to d-linemen who play too high as playing on skates. Lawson not only doesn’t play on skates defensively, but both offensively and defensively, Lawson plays with his studs in the ground. On offense at tackle, where deployed in high school, or guard, where we see him ultimately settling in college, Lawson is a whirling dervish of every charging, ever driving, ever punching whirlwind of blocking vigor. Austin blocks his target up to and through the whistle.

Why exactly some bigger schools, other than UVA-Wise, which offered preseason, are sleeping on Lawson is related to the remoteness of the area in which he lives. Were Lawson enrolled in a more urban area, with more access to coverage and in a state more reputed to produce college football talent, his dance card would be full of suitors for his future services. As it is, some teams seem to be sleeping on the big fella. Well, someone will wake up and get this kid on campus and discover there really is treasure in the mountains and too deeply buried either. When that happens we predict he will join the pantheon of mountain O-Line prospects dominating college football and making other coaches wonder if there might not be a few more Lawsons waiting for their opportunities in the mountains of Kentucky. We assure there are…