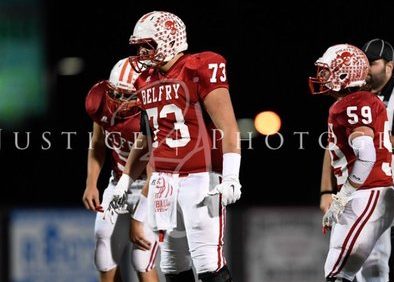 No one needs much in the way of a history lesson to see why Coach Phillip Haywood has such success in coaching high school football. There is also little wonder why he is annually a factor in the State Championship picture. It was only two years ago, that Josh Moore, with the Lexington Herald Times-Leader was wondering on Twitter (@HLpreps) How did this small Pike County school end up with four Division I linemen in its senior class? In a follow up to the tweet above detailed, More wrote in an article, linked here, that…By now anyone who knows anything about high school football in Kentucky has heard about Cole Bentley (a 6-foot-4, 290-pound offensive guard committed to Louisville), Austin Dotson (a 6-6, 305-pound offensive tackle committed to Kentucky) and Rayquan Horton (a 6-1, 308-pound defensive tackle with offers from Western Kentucky, Toledo, Eastern Kentucky and Tennessee Tech). Oh yeah, there’s also all 6-2, 305 pounds of Jordan Scott, who holds an offer from Tennessee Tech. Judging by the current status of the O-Line at Belfry High School, two years ago was hardly an anomaly.

As we have told you before, Belfry boasts the best offensive center in Kentucky’s 2020 class, and maybe even just in Kentucky in superstar Ethan Wolford. We have also written about one of the top guards in Kentucky in his class (2019), Dagan Rash. Now we are going to move out to the Tackle position and tell you about Austin Kyle Lawson, Class of 2019, who is already sporting an offer from UVA-Wise, with more offers certainly forthcoming.

Austin is a 6-4, 330 pounder who also doubles as a nose guard defensively for the Pike County 3A powerhouse. The fact he plays along the defensive front, tells this evaluator that he has an aggressive disposition in his play which is very useful along an offensive front. It also tells me he is adept at playing with low pad level as nose guards are consistently subjected to traps and double teams attempting to dig them out of the A gap. If nose guards stand up, instead of firing out, then they become easy targets for such tactics. In the world of offensive line play, we refer to d-linemen who play too high as playing on skates.

Charles McRae is an example of an offensive lineman who started out playing along the defensive front. He came to Tennessee a high school two-way player (sound familiar) but fancied himself a nose guard when a freshman. McRae was moved over to offensive tackle in college where he found a home. He was selected in the first five picks of the NFL draft, upon exhausting his college eligibility, before playing offensive tackle in the NFL for years. We believe Lawson will also find a home at the next level along the offensive front. When he arrives, his two-way experience will serve him very well. We would also assure you it wasn’t lost on us that Tampa Bay’s Buccaneers and Belfry’s Pirates are basically the same mascot. A buccaneer was how pirates off the Spanish-American coasts were often referenced. Aren’t we clever? Anyway, back to Lawson…

Austin has good punch, sinks his hips well, and gets off the line with a burst. He is what we refer to as a down-hiller and one of the reasons Belfry sported a pair of 1,000 yard, plus, ground gainers last year and rushed, as a team, for around 4,000 yards. Lawson’s play, along with his cohorts, upfront, has many experts wondering, like back in 2016, how this small Pike County school keeps ending up with all these O-Line, Division 1, football prospects? Must be something in the water up in the mountains, I suppose.