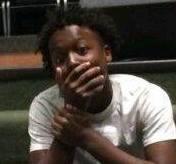 If last year’s statistics have any meaning, and at KPGFootball we would strongly suggest they do, coach Robert Reader’s Mustangs know a thing or two about pass defense. In eleven games last year, the Mustangs of Marion C. Moore High School in Louisville, who are a class 4A, District 3 football team, surrendered a paltry 942 yards passing in 11 games before bowing out of the playoffs to Rockcastle in the first round, at home. The Mustang pass-defense earned 10 additional possessions for the offense, via interception, a year ago with Class of 2020 star DB, Jaylin Lord, accounting for 5 of those interceptions. Lord also contributed a pick-six which he threw-in just for good measure. Jaylin Lord will be back for his junior year at Moore and he will have one heck of a young prodigy to groom in Deon Bibb.

Deon Bibb played for years in Louisville’s MLYA for the Germantown Thoroughbreds. The Thoroughbreds are members of the Metro Louisville Youth Association in Kentucky’s largest city and the league routinely produces top athletic and football talent from which both the area high schools and Team Kentucky so richly profit. Bibb showcased himself as a big time playmaker in the secondary who possesses both long arms and useful length on his 5-9, 150 pound frame. Bibb has been timed covering 40 yards in the low 5’s and covers both receivers and the field well sideline to sideline. Bibb is adept at making appropriate drops and adjustments with the ball in the air. Bibb has a high football IQ and maintains inside position in man-coverage and shows elite ball-skills in his coverage adjustments. Bibb has also shown the aggressiveness to both battle for and win the 50/50 balls as well as anyone in Louisville in his class. Coaches for whom he has before played, describe Bibb as gritty and loyal, noting that Bibb has played, his entire junior pro career, for the Thoroughbreds.

Now, Deon Bibb has been selected to play for Team Kentucky this summer against Tennessee and the Tennessee Future Stars team has before boasted some tall drinks of water split wide in the past several years. We probably all remember Damon Owens from last year who prepped this past fall at the prestigious Brentwood Academy and, of course, two years ago, Team Kentucky had the chore of shutting down Memphis, Tennessee’s Darin Turner, Jr. and his (even then) 6-3.5 inches of ball-hawking ability. Incidentally, for those of you who are new to the Future Stars’ scene, Turner committed this past year to LSU and Owens was ranked nationally by Youth1 as the 36th best player in its Elite 101 in route to being selected an FBU Youth All-American. Have to say, our collective back fours seemed to contain both superstars as Hopkinsville, Kentucky’s Jay Bland blanketed Turner two years ago and Isiah Forrest (also from Hopkinsville) took Owens completely out of last year’s game, with Kentucky winning both times.

Whoever Tennessee’s Owens or Turner are this year, and you can count on them having at least one, the job of shutting this year’s version down may well fall to Deon Bibb. Will Bibb step up like Bland and Forrest before him? KPGFootball thinks he will!