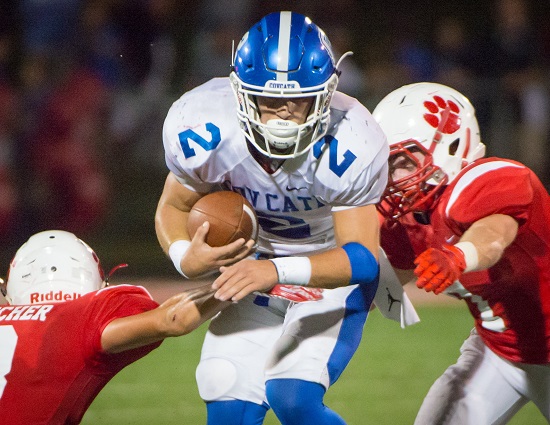 Covington Catholic had Kentucky’s number one rated QB last year in University of Miami-Ohio Redhawk AJ Mayer. Mayer certainly didn’t disappoint in completing 170 of his 265 passes for 3,114 yards and 40 passing TDs in leading Covington Catholic to its seventh overall State Football Championship but first since 2006. Winning 15 straight contests, including the Class 5A State Championship game by a 49-13 margin, is just another example of Mayer doing what was asked of him, and what is any QB’s primary responsibility, and that is leading the team to victory. As is the case with any championship team, Mayer was a long way from a one man show. In fact, there is a fair argument he might not be the best football player named Mayer as little brother, Michael, an AFI-KPG Sophomore All-State TE is already sporting an SEC offer. There was another indispensable weapon last year, and this one will be back for his senior campaign and that is 5-10, 185 pound running back Casey McGinness.

The great Vince Lombardi used to say that the difference between a successful person and others is not a lack of strength, not a lack of knowledge, but rather a lack of will. In the game of football, we discuss a rather nebulous, almost indefinable characteristic all the time. That characteristic, the exact definition of which is hard to grasp, is someone’s being a football player. While difficult to define, we seem to know it when seeing it. It is the guy who gets you six yards when you needed five; the guy who makes the tackle, in open space, at the line of scrimmage on 4th and 1; and the guy who always seems to win the 50/50 balls.  He may not be the fastest, the quickest, the most athletic, but he is the surest and possesses the most pronounced will to win. The one you know will make the play when the play has to be made, the guy with the ability to virtually will his team to success…to victory. Covington Catholic will tell you that guy is Casey McGinness.

So McGinness comes back to attempt to lead his Colonels back to the promise land, and this time he will be aligned behind a new quarterback. McGinness will make people miss, he will run over people, and he will score touchdowns for his team at big moments, when needed most. He will do these things because that’s what Casey McGinness is about…that’s what he does. Woe be unto any tackler or opponent who gets in his way.