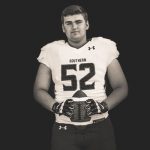 Who knows for sure how tall Dane Jackson really is and I, for one, don’t really care. 247Sports has him listed at 5-11, 255 pounds and that is probably an old number. When he made the AFI-KPG Sophomore All-State Football team at center, we had him at 6-1, 265 pounds. At any height and any weight he is destroying whomever is across from him and isn’t that the real test? Brian Jackson, Dane and Drake’s father, also played college football as a FB for Purdue, and is one of the nicest men I have ever met. The niceness doesn’t extend to the gridiron where the Jackson men have proven thick, strong, and able to get after it. Dane has proven himself an able Jackson man in regard to possessing those traits.

Madison Southern is a Class 5A, District 6, high school who had the misfortune, last season, of drawing a Covington Catholic team in the State Championship game which no-one outside of Louisville Trinity was going to much challenge. The Eagles run game, behind Dane and his o-line cohorts gained 3,407 yards rushing from scrimmage and boasted two 1,000 plus yard ground gainers in the same backfield. Carter Smith gained 1,442 yards from scrimmage and Quarterback, Landen Stacy, threw in his 1,023 rushing yards just for good measure.

Dane, like his brother Drake before him, has the versatility to play numerous positions along the offensive front and has been most deployed at both center and guard. We believe he will settle at the next level along the interior offensive front, most likely as a center (like his brother). Dane fires off with low pad level and plays with exceptional balance and runs his feet through the whistle. I like to say offensive line play is about technique over physique. My exact phrase is technique trumps physique when physique has no technique. Dane is mobile, strong, aggressive, and smart, with good arm length, permitting him to gain separation. Though not as tall as other players, Dane is a technician and may well be the best pure offensive lineman in the 5A classification this coming year.