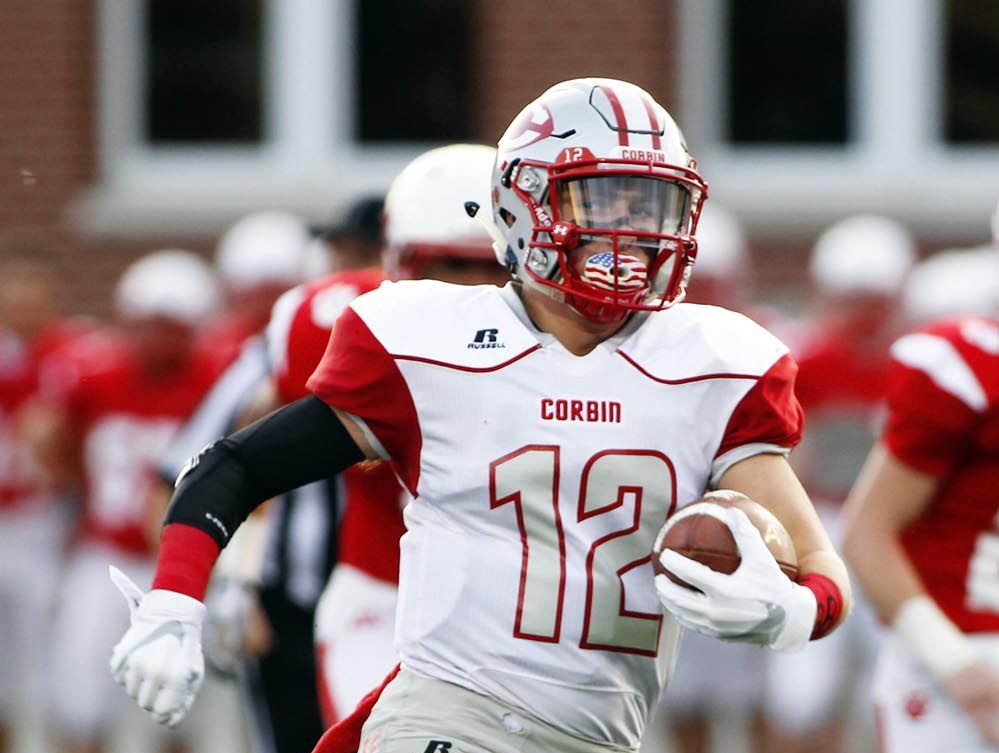 Coach Justin Haddix‘s Corbin Redhounds really had it rolling last year…until they hit Boyle County in the Championship game. I mean, they beat Tennessee’s Class 3A State Champion and perennial powerhouse, Alcoa High School, in their house. They had a slight misstep on the road against Class 1A Beechwood (Hey, at least Beechwood won the Class 1A State Championship), and sailed smoothly into Kroger Field, after beating powerhouse Louisville Central in the Semis, in Louisville 21-20. Yep, it was unfolding just like Coach Haddix’s staff had planned it, and then Boyle County stepped on them 40-21. Oh well, back to work.

Well the problem with back to work is you don’t get to keep the same workers year in and year out in high school football. How in the world is Corbin supposed to replace Cameron Sizemore? Last year, Sizemore’s back-up at the QB position was Chase Estep. Should Coach Haddix just slot Estep into the QB position? Before you jump on that solution there are a few things you might consider. First, Estep is the leading returning rusher, having gained 710 yards on the ground in 113 attempts last year with 8 rushing TDs. Secondly, Chase Estep was one Sizemore’s favorite target in the passing game as he caught 51 passes for 631 receiving yards with 6 TD receptions. So, if we slot Estep at the QB position, who’s going to run it and who’s going to catch it? Suffice it to say, I am glad this decision doesn’t rest with me. That’s why Haddix makes the big bucks I would suppose.

Regardless, it would appear a team which passed for 2,852 yards last season, against 1,965 rushing yards, on its way to scoring 543 points, while allowing only 216 in 15 games, appears left with a decision. Can they favor the pass to the extent they did last season or are they going to be left to grind it out on the ground? It would appear to me, whatever the Redhounds should decide, they will definitely have the Class of 2019 product Chase Estep decidedly in the game plan. It would also appear to me, should Estep step into Sizemore’s departed shoes at the QB position, he probably won’t be the same type of QB as was Sizemore, who may have had the ability to scramble (over 400 rushing yards last year), but clearly favored the forward pass to scrambling. You would have to agree it is rather fortuitous that Chase Estep, the 6-0, 190 pound multi-sport superstar, is so versatile of an athlete.

Exhibit A to Estep’s athletic versatility is his playing even more positions in baseball (3B, 2B, MIF, RHP) than he does in football (WR/RB/QB). Chase, who is committed to play baseball for the University of Kentucky upon exhausting his high school eligibility, is also a member of the Kansas City Royals Underclass Scout Team. Estep was both a 2017 and 2018 Underclass High Honorable Mention All-American in baseball together with his stardom on the football field. There is little doubt Estep, who turned 18 during his junior year, is one of the most versatile and talented athletes anywhere in Kentucky. Coach Haddix may just find having the ball in his hands every offensive play isn’t such a gamble after all.