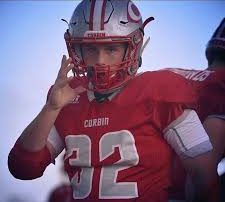 Probably showing my age a bit today, but my favorite all-time superhero was Mighty Mouse. Sure he wasn’t very big but Mister Trouble never hung around, when he heard his mighty sound…or words to that effect. If there was one catch phrase which fully encapsulated Mighty Mouse to legions of fans it was Here I come to save the day! I am sure the Corbin Redhounds thought something very similar last year as its diminutive, under-sized, MLB, Grant Gibson, at 5-8 and 185 pounds, was leading the team with 96 tackles for the 13-2 ball club. I am sure saving the day came immediately to mind when he recovered a team leading 5 fumbles last season, two of which in the end zone for touchdowns and one of the recovered fumbles was for six points in the State semi-finals agains Louisville Central in a game Corbin prevailed 21-20.

I have no doubt Gibson will, next year, be there to save the day from his middle linebacker position; especially since departed senior Ethan Sims has exhausted his eligibility, taking with him his team leading, solo tackles figure of 52, out of his 85 total stops. Gibson will have some help next year saving the day for Coach Haddix’s defense as 2019 classmates Mathew Masternak (71 tackles) and Nate Smith (67 tackles), both very productive defensive linemen, are back as is fellow linebacker Noah Taylor (92 tackles). Who’s going to save the day for an offense losing a quarterback who completed 185 of his 272 pass attempts for 2,695 yards and 32 TD through the air with only 7 interceptions thrown? Who’s going to save the day for an offense which may see its leader in both rushing yards and receptions, Kentucky baseball commitment Chase Estep have to assume QB duties? Well, assuming Mighty Mouse isn’t around, why not the equally mighty, Chase Gibson?

Gibson lists running-back as his offensive position. We here at KPGFootball are unable to find where he contributed to last years’ team 1,965 rushing yards or its 30 team rushing TDs. However, his size dimensions, though outside the box of what evaluators consider suitable for linebacker play in college, owing entirely to his height, is perfect for playing running back. There have been loads of fantastic running backs in college football who were 5-8 or even shorter. His 185 pounds and substantial lower body power and strength would be well suited for being a tough, inside, between the tackles, type runner coveted by lots and lots of schools. His tough, gritty, collision-seeking demeanor you see amply exhibited on his highlights would be equally well suited for the running back position. He even wears a running back’s number (32). Borrowing once more from my favorite superhero, though the Corbin offense may be in danger of not replicating last year’s efficiency and production, we should not despair…Cause we know that where there’s danger he is there/
He is there, on the land, on the sea, in the air! Corbin fans, I give you Grant Gibson and…Here he comes to save the day!