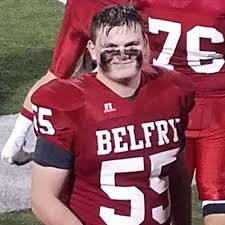 We selected Wolford to our AFI-KPG All-State, Sophomore, Football Team as an O-lineman. There were two outstanding Centers in the Class of 2020 and we elected to select them both, which was a selection committee prerogative. If you have never seen Ethan’s sophomore highlights, perhaps you should give it a look. I believe Ethan’s selection, in view of his play, was self-evident, you tell me. Here’s a link to Ethan’s sophomore highlights. In the end, we felt offensive line was a particularly strong position group on our Sophomore All-State Football team and both Centers we took were way too good for either to be omitted. One thing which is worth mentioning is that, since the end of this past football season, Ethan has been busy on the wrestling mat Wolford establishing himself as one of the top Heavy Weights in his Region. Ethan went 3-1 in a big wrestling tournament this past week-end, with his only loss being on points to a top rated grappler. There has been a long affinity between football coaches and the sport of wrestling. I remember going to visit Father Ryan High School in Nashville, Tennessee when my own son, William Long, was an 8th grader. Our reaching out to the Father Ryan football program first and William’s being both Roman Catholic and an accomplished football player, developed in Father Ryan gauging our family’s interest in enrolling William in the parochial school to enable his participation in Father Ryan’s football program. One of the first things about the school it touted was its fantastic wrestling program, which the school considered a sufficient inducement for a young football player to pursue his prep career there. Obviously, the school told us about its football tradition too, but it was equally intent on our being aware of its wrestling prowess. Why is that? Well, former Head Coach of the Oakland Raiders, John Madden, once said he would have all his offensive linemen wrestle, if he could, and the great Tom Osborne, Hall of Fame football coach who formerly coached the Nebraska Cornhuskers, once was quoted as saying [w]restlers make coaching football easy. They have balance, coordination, and as a coaching staff, we know they’re tough. This much I can tell you, the reader, Ethan Wolford is certainly tough, has excellent coordination, and balance, as his film suggests and he has been able to translate the same skill set he possesses to wrestle into a fine football lineman almost without equal in his Class in Kentucky.

In an article entitled Calling the Hogs…Sooee!, I related the following about Ethan Wolford still true today… The Belfry Pirates were on an eleven game win streak before losing, in the State Quarters, to Central. That put the Pirates finishing at 11-2 on the year. For the Class 3A, District 6, school, that is probably a disappointing year. Coach Phillip Haywood, at Belfry High School, has won 428 times against 131 losses over 43 seasons and has played for the state title 12 times, winning 6. When I tell you no one around the program will be happy with going 11-2 and losing in the State Quarters, I mean it. Great year for a lot of programs, but, at Belfry, winning 11 is like going 6-5. Belfry has an abundance of young talent which bodes well for it in the future, and is represented well on both our Freshman and Sophomore All-State teams. Ethan Wolford is a football playing stud, who plays Center at Belfry, but whom we decided to just list as an offensive lineman. There was no doubt, among the committee, whether Wolford was, clearly, one of the top players at his position group in Kentucky for the Class of 2020. Ethan, as a freshman, attended the FBU Camp in Washington DC and was recognized as one of the top lineman, receiving the Top Gun Award. This came with an invite to Rock Hills, SC for the Top Gun Showcase. Wolford has camped at Marshall University and was invited to the David Jones Camp where he won the award for the Top Offensive Lineman…Wolford started every game for Belfry as its Center and, ex officio, captain of the offensive line. I say that because, most of the time, the Center makes the run and pass protection calls.  Ethan Wolford is just a damn football player, which Coach Haywood has a penchant for producing, and we are proud to include him on our All-State team.

Whether it is wrestling or football, one thing which appears to Kentucky Prep Gridiron to be abundantly clear is that Ethan Wolford is a name, as we go forward, the reader should keep in mind as one of the very best prospects in Kentucky’s 2020 football class. Who knows, he just might add a Heavy Weight Class State Wrestling Title to his résumé too. This is Fletcher Long reporting for Kentucky Prep Gridiron reminding you to PLAY THROUGH THE WHISTLE!