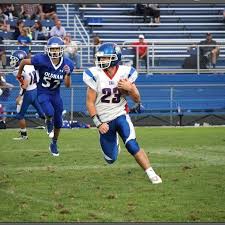 Well, first it was Braeden and Brandt Babin, and now it is Connor Carr. If you are an upcoming opponent of CAL and hoping to gain ground on the Class 2A, powerhouse which won the State Championship in 2016 and bowed out in the State Semis, last year, to runner-up Mayfield, at Mayfield 21-14; then I have some bad news for you. Here it is…Stefan LeFors’ District 4 Centurions were rebuilding last year and still went 11-3. That is one reason we picked them 2nd in our preseason poll, just behind Mayfield. Another reason is because they have talent in the middle school system, like Connor Carr, whom may come into the fold next year. When this talent arrives, it won’t be pressed into immediate service like the Babins were last year. Now, Just because Connor Carr attended middle school at CAL, that is no guarantee he will play high school ball for the Centurions.

Now, we have been over this many times, and the examples of this are voluminous, but there just isn’t any record, anywhere on-line, detailing the measureables and abilities of top-flight middle school football talent in the Commonwealth and surrounding areas. That is, of course, until KPGFootball features them. That is why funding and supporting our efforts is so important. Connor Carr, who has had an illustrious middle school career is an example. There just isn’t any available information about him anywhere, so we are going to have to guess. We would put Connor in the 5-10, 190-200 pound range. Guessing again, we would expect his 40 speed to be in the 5.2 to 5.4 second range.

Connor Carr is a guy, similar to Braeden Babin, whom we believe will ultimately settle at linebacker doubling as a fullback, offensively, for CAL or for any other High School team which draws his services. For the purposes of Team Kentucky, Carr is listed on the Future Stars’ Roster as a running-back. We believe it would be a good use of man-power were he to be deployed in a similar fashion to how CAL’s varsity deployed Braeden Babin this past season. Connor Carr, and his linebacker mentality, deployed at either fullback or H-Back in the Spread, would punish would-be Tennessee tacklers trying to corral the faster backs on the roster. At KPGFootball, we can say for sure that Connor Carr is far from the fastest backfield player on the roster for Team Kentucky this summer; but, much like Braeden Babin, he might be the last one you want to meet in the hole.

Connor was described as another coach we consulted as having been a grown man since he was 13. Although there are questions about what his exact straight line speed may be, it should be noted that he never got caught from behind by any of the back four defenders he faced last year. Carr had several games of around 200 yards rushing from scrimmage according to another coach consulted for the purpose of preparing this article. Carr was also described as solid, aggressive, downhill runner who bowls you over but appears to have the ability to make you miss but didn’t have to do much of that at his size in middle school. This past season, Connor Carr played both running back and linebacker for his team which he lead to a 3rd place conference finish and an overall 8-2 record.

In talking with a head coach from that conference, he described Connor as a fantastic young man, hard working, just a damn good football player. This same coach went on to elaborate that Carr was a real, between the tackles, down-hill workhorse for CAL Middle School on offense and its top playmaker from linebacker on defense. KPGFootball got the opportunity to watch Connor’s highlights and, from what we saw, he appeared most effective attacking the line of scrimmage in the run game. Connor was most effective when getting down-hill immediately and, when he did, he appeared to us similar to a bull in a china shop. Carr should waste little time at attempts at being shifty and just rely on being powerful, that is his game.

Not speaking for anyone here, but my strong suspicion is his power and punishing ability in the run game is why he was selected to Team Kentucky and the type play expected from him once on he gets on a high school roster, at whatever high school that might be. Sources we consulted in connection with this article have indicated to KPGFootball that Connor Carr is likely headed to Louisville Ballard High School to play next year. If that is true, he will certainly be joining some fantastic young talent there, like AFI-KPG All-State and MaxPreps Freshman All-American linebacker Justice Thompson.