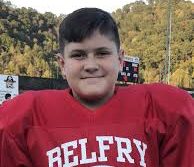 I would like to tell you what we at KPGFootball consider the most important thing we accomplish in publishing the stories we do about the players for whom we provide coverage. We create a record of their existence. You wouldn’t believe how hard it is to even just find a picture of a top-flight middle school football player anywhere on line, much less find out any information about them. In meeting with Coach David Jones and partnering up with David&DarrylSports.com, the one thing on which we were in complete agreement is we had a conjoined desire to use the Mountain All-State Football Combine to initiate the creation of a digital record of the abilities and athletic accomplishments of young area football players…like Jonah Adkins, from Belfry Middle School, par example. Try to find, anywhere online, a published story about Jonah Adkins which contains any of the information we are going to publish herein. Go on now! Give it your best shot!

Jonah Adkins came to our Mountain All-State Football combine and shattered any bias against seventh grade football players being physically capable of playing 8th grade football from which any middle school football fan may have before labored. Remember, Jonah Adkins is a Class of 2024 prospect which means he has just left sixth grade, and hasn’t attended a day of 7th grade yet. That aside, I know the middle school football coaches at what may be the premier middle school program in the KYMSFA (Kentucky Middle School Football Association) has to be virtually slobbering all over themselves at what is coming their way. Just imagine into what he is likely to develop over the next two seasons. First of all, Jonah Adkins, at 5-7 and 150 pounds now, with the frame to explode before the season begins, ran both his 40 yard dashes under 6 seconds, 5.9 seconds and 5.8 seconds respectively. Both times are elite for someone primarily deployed defensively as a DE and secondarily as a TE on offense. Couple that with his running a pro-agility shuttle (5-10-5) of 4.81 seconds and this is a kid likely to scream around end next year before a 7th or 8th grade tackle is able to get out of his stance. Then take into account Adkins was timed in the L-cone drill at 8.4 seconds, and I don’t believe I have ever seen a 6th grade, rising 7th grade, football player beat 9 seconds in that drill prior to our combine, and Adkins is moving with a speed, quickness, and coordination of a much older athlete.

I am, of course, proud to have been involved with awarding Jonah Adkins top honors for his performance in the middle school Mountain All-State Football Combine. I am even more proud to say that I was able to be the first sports writer to get the estimable privilege of beginning the online record of the athletic feats of Jonah Adkins from Belfry, Kentucky. I can assure you I will not be the last writer to write about the young man!