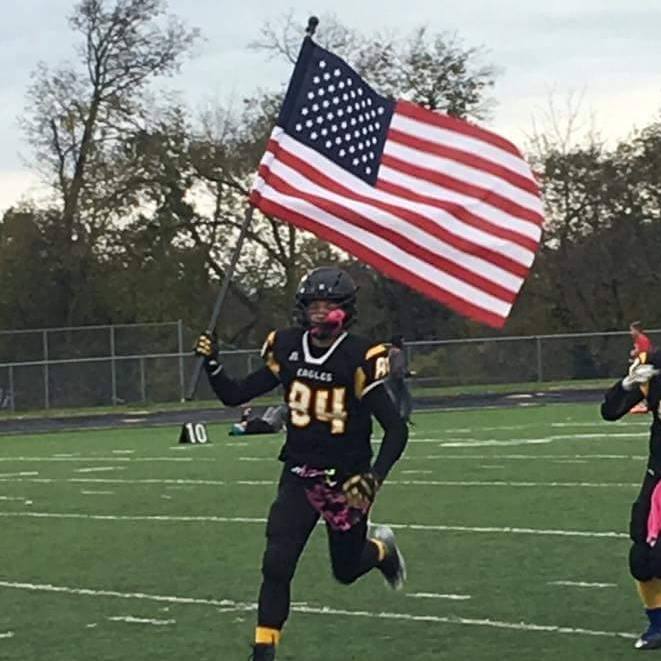 The first thing we need to get straight is that anybody who has ever played for one of the Team Kentuckys (East-West, Future Stars, or FBU) is an All-State Middle School performer. Now, this year, KPGFootball is going to compile, publish, and defend every selection to its middle school All-State football team just like we did the 9th and 10th grade teams last season. A guy who has aged out of being a Middle School All-Stater, but is on our official watch list for the 2018 Freshman All-State team is Johnson Central High School‘s Keygan Pelfrey. Pelfry is a former three year member of Team Kentucky FBU and just recently finished playing for the 8th grade Team Kentucky Future Stars in its victory over the Tennessee counterpart at Geogetown College. Keygan performed at our Mountain All-State Football Combine at Pikeville High School and calling what he did just a performance is quite understated. Keygan Pelfry dogged out as the younger set likes to say!

The first thing we, at KPGFootball, would like to note about Keygan Pelfrey is to look at him, you are ill-prepared for the performance you’re about to get out of him. I mean the 6-1, 180 pound, Class of 2022 prospect, really just looks like any other tall, lanky, 8th grade (rising 9th grade) football player at first glance. In a feature I did on Keygan prior to this year’s Tennessee-Kentucky Future Stars’ Classic, I noted that Pelfry already squats northward of 300 pounds, while bench pressing 225. Well at the Mountain Combine, the 180 pounder bench pressed 5 pounds more than his body weight (185 pounds) which is the High School rep weight, 8 times. When you apply the old muscleandstrength.com bench press calculator to those figures it relates an approximate, one-rep, bench press maximum lift of 235 pounds. As someone who regularly accesses that particular program, I have to say I have found it frighteningly accurate. Now, this is a kid who hasn’t been too involved in weight lifting to date, as almost no middle schoolers ever are, who is what I would describe as freakishly strong for his age and anatomical development.

Now on top of physical prowess, the kid is alsofreakishly fast. His best timed 40 yard dash at the Mountain All-State Combine was 4.61 seconds but both of his time 40’s were under 5 seconds and both his pro-agility shuttles (5-10-5) were timed at 4.7 seconds. Pelfrey’s fastest L-cone drill was run at 7.5 seconds making him the strongest and one of the most physically gifted, fast, agile, and quick of the 2022 kids at the combine. Of course, he was selected to play for Kentucky in the Future Stars’ Classic so shouldn’t we have anticipated this being the case? Well, I suppose, but it still never ceases to amaze me when I see it. Just thought I would mention, Keygan has a nearly 30 inch standing vertical too.

Keygan figures to contribute right away at Johnson Central and probably at its TE position as the offensive front’s 6th lineman and working the middle zone in the short passing game matched up, one-on-one with opposing linebackers. If Pelfry isn’t a day one starter for the Eagles, it won’t take him more than a few games to make the starting line-up and he will see the field and figure prominently in the Johnson Central brain-trusts’ game plans as early as game one, or at least that is our prediction. Keygan Pelfry took top honors among our 2022 prospects at his position at the Mountain All-State Football Combine and is someone who has planted himself squarely on the watch list for KPGFootball’s 2018 Freshman All-State Football team.