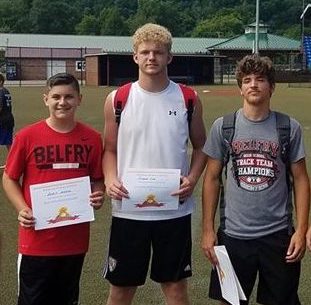 We knew Grayson Cook could play the game going into the Mountain All-State Football Combine at Pikeville High School. After all, he was a returning All-State Football player who, going in, was one of the headliners we bragged about attending. We knew Grayson could move a little bit. He had camped all summer long at a variety of different schools making a lasting impression for his size, frame, length, speed, and quickness at every last one of them. For what I am not so sure we were adequately prepared was exactly how fast, agile, and quick the 6-4 and 210 pound OLB from Pond Creek really was. There were several athletes who really put on shows at Pikeville High School. I mean, hey; it’s not The Mountain All-State Football combine for nothing! It reminds me of an anecdote about a Mexican golfer in the seventies by the name of Lee Trevino. Trevino was hitting shag balls at a tournament and a female patron was oohing and ahhing after every swing. He turned around to her and said, Madame, I am the defending United States Open Champion, were you expecting grounders? The point is that many of the combine attendees were returning All-State Football players from a season ago and none of us should have expected grounders.

Well, Grayson Cook wasn’t hitting any grounders either. Cook ran both his 40s in the low 4.5s with his first being 4.52 seconds and his second being 4.51 seconds. His fastest pro agility shuttle (5-10-5) was 4.30 seconds and his fastest L-cone drill was the fastest at the entire Combine at 6.5 seconds. Grayson, who was coming off a recent shoulder surgery and wasn’t slated to lift at all, surprised us all when he elected to jump on the bench and knock out 6 repetitions at the high school rep weight of 185 pounds.

This past season on Pond Creek, Grayson registered 51 tackles for the 11-2 Belfry Buccaneers, caught a pass covering 45 yards, and converted 19 PATs as a kicker, and blocked a punt. Belfry plays a lot of 3-4 defense and walks up the outside LBs quite a lot to give the defense a 5-2 look with the OLB posing as a stand-up rush end against the run with the ability needed to cover, from the line, TEs or Slots slipping into routes. Any defense aligned in a 3-4 as a base defense relies heavily on versitility in the linebacker corp. While the inside LBs are allowed to run to the football in the 3-4, the OLBs, where Grayson plays, have to make plays as edge defenders out of the stand-up, two-point stances. Grayson showed during the year and at the Combine‘s one on ones and seven on seven portions that he had the ability to rush off the edge, close the formation, or hold the point versus the strong-side run, while exhibiting the ability to make plays as a cutback defender, and also display the athleticism to drop in coverage. Grayson exhibited the speed and agility to drop into coverage and take away the 10-15 yard out with his speed and length, while still possessing the closing speed to get to the swing and screen pass, or the sweep or stretch in the outside ground game. Grayson was awarded Top Honors by the Combine for his position and was one of the best pure athletes we saw on the Mountain at the Combine. I mean, he was a returning All-State Football player after all. Where you expecting grounders?