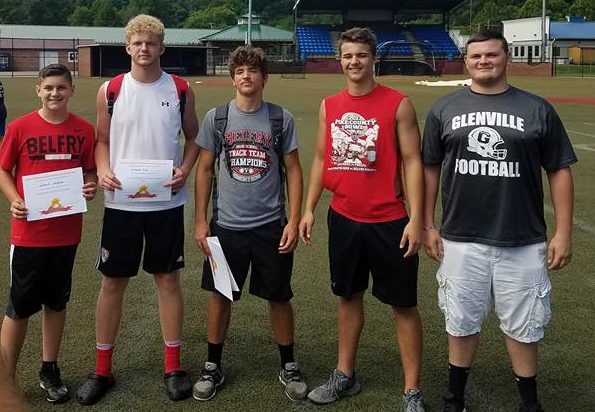 Everyone on the Mountains knows that Class of 2021, Isaac Dixon, a guy who made our Freshman All-State Football team as an athlete, is fast. He averaged 15.15 yards per carry this past season at RB in limited action (13 carries, 4 of which were TDs) and had 16 tackles at Safety, while playing varsity football as a freshman for one of the most storied programs in Kentucky’s prep football history. Dixon tore it up in Tack & Field, running a reported personal best 10.67 second, 100 meter. By the way, track times are fully automated, eliminating human error and at 10.67 seconds in the 100 meter his approximate 40 yard dash time, fully automated, would be in the low 4.4s. Dixon has also shown out at numerous camps before getting to the Mountain All-State combine, running a 4.6 flat, 40 yard dash at The Ohio State University earlier in the summer. However, what Dixon was able to do at the Mountain Combine is understated as being described as just fast. I would say lightening might be an even more apt description for the Pond Creek star.

Isaac measured at 5-9 and weighed 170 pounds for us at our combine and ran the 40 yard dash in a blistering, hand-timed, 4.45 seconds in the cool mountain air. He finished the pro-agility shuttle (5-10-5) in 4.23 seconds and the L-Cone drill, during which he fell down both attempts, he still logged a 6.7 seconds for second fastest at the combine, falling be damned! As for strength, Isaac, though only having just finished his freshman year in high school, and only weighing 170 pounds, still managed to rep the high school bench press repetition weight of 185 pounds 7 times. That computes to an approximate, one-rep, bench press maximum lift of 229 pounds. Dixon dominated the one-on-ones and seven-on-seven portions of the combine whether he was defending or in the pattern which led to his being named the Combine’s Most Outstanding Player. He also took top corner honors. The only thing stopping Isaac Dixon from corralling offers right now is his being a Class of 2021 prospect. He is dynamic, explosive, powerful, fast, quick, and, from what we saw in the Mountains, someone with a ton of dog in him.

It’s anyone’s guess how Coach Phillip Haywood will use Dixon offensively, though we are quite sure, with his recovery speed and coverage skills, he will, once again, anchor the defensive back-four. Belfry graduated a dynamic playmaker whom possessed many of the physical skills as Dixon possesses in Taveon Hunter. All Hunter did last season was carry the football 78 times, gaining from scrimmage 1,285 yards rushing with 15 rushing TDs. While Hunter is gone to college to play Division 1 Football, Dixon figures to get some of those carries behind what KPGFootball believes to be the best offensive line in Kentucky. Will Dixon replicate the offensive production of Hunter before his days on Pond Creek are through? If he doesn’t, it sure won’t be because he lacked anything physically that Hunter had as both their athletic cups are overflowing.