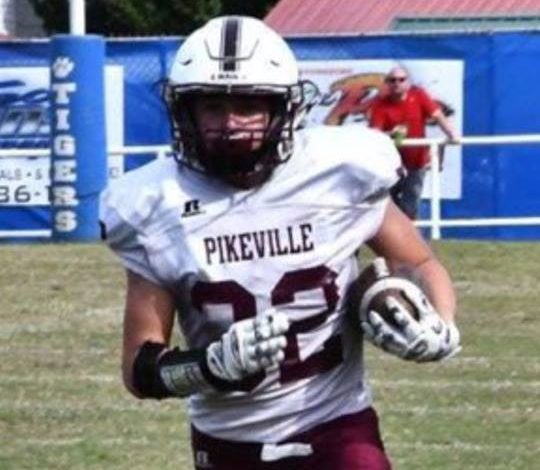 First of all I would like to thank our friends at DavidandDarrylSports.com for contributing the statistics to this article. We partnered up with them to conduct the first ever Mountain All-State Combine and believe this past event to be just the first in what will be many joint ventures along the lines of promoting Mountain football prospects. Those guys are first rate.

One of the top prospects we evaluated positionally in the Mountains was Pikeville High School’s Connor Wright. Connor last year for Pikeville, gained 1,501 yards rushing from scrimmage in 120 rushing attempts for a healthy 8.34 yards per carry with 19 rushing TDs and 22 converted two-point attempts. Connor showed he had reliable hands from out of the backfield too as he caught 18 balls for 268 receiving yards and 14.88 yards per catch. The one-man wrecking ball was equally lethal as a lead blocker, bullying his way to 25 pancake blocks from the fullback position. Defensively, Connor had 141 tackles at LB, 81 of which were solos, with 23 tackles for loss, 9 sacks, 4 fumble recoveries, 11 pass break-ups, and 4 interceptions. We really didn’t know which award to give Carson as the Class of 2020 prospect was our top player at both fullback and linebacker for the high-schoolers. When we collected his combine data, it became readily apparent why he was so productive on the football field a season ago.

Connor is 5-11 and weighs 200 pounds but has the frame to up that weight to around 220 to play in college. He has sufficient length at the next level to play either MLB or FB depending on the college system being employed by the school recruiting Connor. Wright ran a 4.59, 40 yard dash up in the Mountains at the All-State Combine and recorded a 4.1 pro-agility shuttle (5-10-5) for one of the quickest times at the event. His L-cone time as 6.8 seconds, which again, exhibited one of the quickest and most fluid change of direction skill sets at the combine. Connor elected to lift at the College/NFL Combine rep weight of 225 pounds and tallied 6 repetitions, for an approximate one-rep bench press maximum lift, according to the bench-press calculator, of 270 pounds.

As for on which side of the ball Connor plays at the next level, that is a somewhat unsettled question. It doesn’t appear at all in question whether there will be a next level. Connor has D-1 frame to play LB in college and D-1 fullback frame as well with elite mobility and well above average power numbers. Connor is a guy, as he continues to fill out, and, as he participates in a college’s Strength & Conditioning program, whom we could see playing at the next level between 220-230 which is the heft craved at either position. Clearly, Connor Wright is among the elite prospects in his Class in all of Kentucky and someone who will, undoubtedly, be high up on many voters’ All-State Football team ballots, including this one’s.