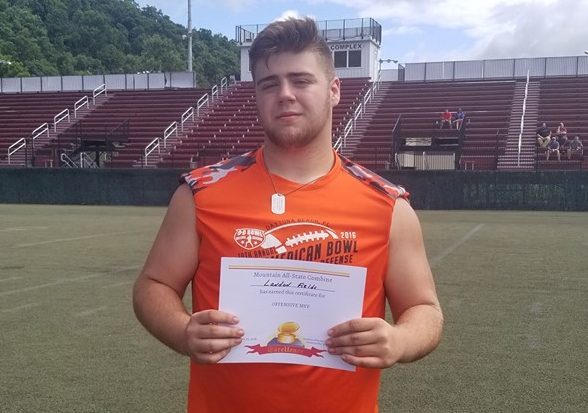 I wrote about Landon Fields in a feature the title of which was probably the best title I have yet contrived. It was entitled Landon Fields from Somerset High School is One of the Baddest Bunnies in the Briar Patch and was published in April of 2018 and the Bunny reference is owing to Somerset High’s mascot being the Briar Jumpers. If you will hit the above title, it is a link to the article itself. Landon is a kid whom has just continued to work hard and develop and, going into his senior year, has to be one of the most imposing and athletic players in the entire Commonwealth’s Class of 2019. I have seen Landon on full display twice this offseason, the first time at the Kentucky Future Stars’ Alumnae Combine in New Albany, Indiana, and the second at the Mountain’s All-State Combine in Pikeville, Kentucky, where he came away with top honors among the offensive line prospects out of some 15 or so vying for the distinction.

Landon played exceptionally well at the nose guard deployment for Somerset and still considers it his primary position. I mean when your nose guard contributes 52 total tackles, 36 solos, with 16 assists in 12 games while drawing double and, often, triple teams; well, that’s right impressive production and shows an aggressiveness which will serve him well when he plays offensive guard in college. Landon is a two-way player at Somerset where athletes like him can’t really ever be spared at the 2A Classification. Fields’ athleticism and power numbers are even more impressive than his on-field production. At the All-State combine, Fields was timed aslow as 4.9 in the 40 yard dash at 6-3 and 280 pounds while finishing the pro-agility shuttle (5-10-5) in a low of 4.5. Field’s clipped off the L Cone Drill in 7.2 seconds and bench pressed 225 pounds, 19 times. That is a one-rep, approximate bench press of 357 pounds. Field’s back squats 550 pounds too, we just thought we would tell you.

Landon has drawn a lot of attention this summer and his dance card includes plenty of admirers. This is a guy for whom the offers will start pouring in literally at any time as he is a guy who just continues to improve his physique, power, explosiveness, and performance every time he goes out and participates in a combine and there is no doubt he will tear up Class 2A, District 7 this Fall. Fields not already sporting numerous offers has more to do with the area of Kentucky from whence he comes than anything to do with him as, if he lived in a more accessible and recognizable area, the top offensive guard prospect in the Commonwealth’s senior class would be getting pestered by recruiters half to death. Landon is also an excellent student at one of the top-ranked public high schools in Kentucky and probably the nicest and most genteel young man you could ever hope to meet and showed in Pikeville he is a real leader as he constantly encouraged and bragged on every prospect at the combine instead of obsessing over himself. Recruiters, this is one who won’t stay an unknown for very long as he is a sure-fire Division I college prospect in football whether he lives in Los Angeles or Anchorage, Alaska.