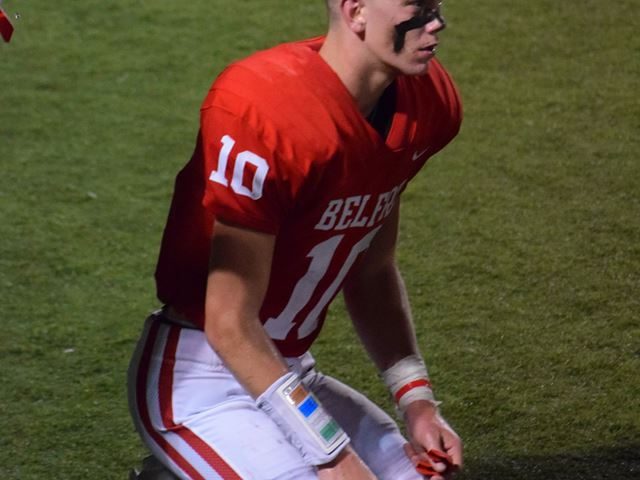 I was at a middle school game last night watching Hopkinsville Middle School play Logan County. One of the HMS players came up to me and said, Coach, that list of top players in Kentucky you published for my class was wrong. I said, what was wrong about it, son. His response was, I wasn’t on it. I admire the attitude and believe wholeheartedly a star player should feel that way. I was there to watch the game, last night, and told him he had four quarters to show me my error. I tell that story to iterate the following. Those of us who formulate and publish top player lists are often wrong. Instead of it being the top players in such and such class in Kentucky, it really is the top players in such and such class in Kentucky of whom I have heard or whom I have seen. We miss plenty, we aren’t perfect, we do the best we can.

There is a Class of 2021 kid I have missed till now and I am admitting to you, I missed him in both my 2021 rankings and freshman All-State football team from last year. That doesn’t mean I will miss him when we publish the sophomore All-State team at the conclusion of the 2018 season as I now have my eye-ball directly on him. His name, Brett Coleman, and he is the strong safety for one of Kentucky’s premier football programs.

Brett, as a strong safety for the Belfry defense, in only four games so far this season, is leading the Pirate defense (and 4th in KY’s 3A classification) with 50 tackles from strong safety. Coleman has also intercepted a pass. Now, the general rule of thumb is you don’t want back four defenders leading a defense in tackles. However, that rule is not as true when you are talking about a strong safety because that position is really more of a linebacker than it is a defensive back. Strong safeties are best described as linebackers with speed who both cover receivers but are also required to be a force in run defense. They are usually aligned in the middle of the field on the formation’s strong side (hence the name) and often play close to the line of scrimmage to remain both involved in run defense and to provide cover to the opponent’s tight end on passing plays. The safety/TE matchup favors the defense more than a linebacker matched up with the same offensive player.

With the advent of TE play, coupled with covering TE frames which are big enough to be sixth offensive linemen and fast enough to abuse linebackers attempting to cover them over the middle, coaches are preferring strong safety frames which are increasingly lengthy. College coaches are looking for frames like, say,…Brett Coleman’s. Coleman is 6-3 and weighs in the neighborhood of 175 in spite of the fact his Hudl page’s information regarding his present size is woefully out of date. Brett, offensively, backs-up the starting QB and the FB and has been pressed into both positions, owing to injury, already this year. Brett has 25 carries on offense and has gained 150 yards with 2 rushing TDs in limited duty. Brett, which is also coveted in strong safety types, is a superior, multi-sport athlete who has been a varsity starter for Belfry in both baseball and basketball since being called up in those sports in 8th grade.

College coaches, there you have it. We all need to keep an eye on Mr. Brett Coleman going forward. It’s not everyday you get a 6-3 inch, 175 pound, three-sport star, with the size, frame, length, and athleticism to come up and do all of the things required of strong safeties. Brett Coleman is more than just leading Belfry’s defense, though only a sophomore. Brett Coleman’s just a leader. Isn’t that the characteristic we are trying to build in football anyway?