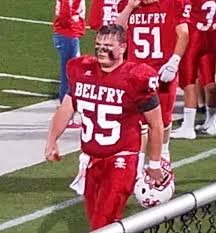 The Cincinnati Bearcats, an FBS, Division 1 football team which competes in the American Athletic Conference, will be hosting a couple of Kentucky’s finest in the Class of 2020 this upcoming weekend. Interestingly enough, the two players the Bearcats have summoned to Cincinnati are not only high school teammates at Belfry, but cousins, as luck would have it. Two tremendous prospects, each one of whom is really hot on the recruiting trail, and both of whom are among Kentucky’s finest at his respective position, are offensive center Ethan Wolford and outside linebacker Grayson Cook. We will take a moment to outline for you what makes them such sought after prospects.

Ethan Wolford, who we have consistently identified as Kentucky’s top center prospect in his class, at the least, and certainly among the best centers in Kentucky, regardless of class; certainly looks like, provided the cards fall just right, he will have plenty of options concerning just where he will make a college home. This prospect has been to the University of Louisville, Marshall, Tennessee Tech, Eastern Kentucky, and is now headed to Cincinnati where the Bearcats have indicated they would like to see what’s causing all the fuss about this particular center. Well, it won’t take them very long. Ethan has a really good frame for the center position and anchors probably the very best offensive line in Kentucky. Belfry, so far this year, is averaging 333 yards a ball game, on the ground, with everyone in the stadium aware the Pirates are going to run the football.

In 2017, in being selected to our Sophomore All-State football team, Wolford anchored a line which averaged 370.2 yards a night, on the ground, and led the push toward gaining 4,813 or so yards on the year over its 13 ball games. The Pirates finished 11-2 in 2017.  Ethan is what we call a multi-level blocker, or down-hiller, with the ability to either completely dominate the opposing nose-guard or combo up to the second and even third level defender. Unlike a lot of offensive linemen attempting to block down the field, Ethan is athletic enough to actually block a second or third level defender once he arrives, and fast enough to arrive before the ball carrier.

Ethan is presently holding numerous offers from both Division I and II schools. His family has been very private about some of his offers until it is decided, as a family, the time is right to make an announcement. There will be information forthcoming soon about some of the schools whom have offered the prized offensive center prospect.

Grayson plays positions which, from a statistical standpoint, is easier for the casual fan to appreciate. Much more of what Grayson contributes, though no more important than an offensive lineman’s contribution, is easier to log in a stat sheet. During the 2017 season on Pond Creek, Grayson registered 51 tackles for the 11-2 Belfry Pirates, caught a pass covering 45 yards, and converted 19 PATs as a kicker, and blocked a punt. So far this season, and in only four football games, Cook is off to an even faster start visa vie tackle production. Cook, in four games, has already registered 38 stops. Belfry is rolling too, as the Pirates are 3-1 on the year with only a one-score loss to one of West Virginia’s top ranked teams between it and perfection.

For those who don’t know, Belfry plays a lot of 3-4 defense and walks up the outside LBs to give the defense a 5-2 look with the OLB posing as a stand-up rush end against the run with the ability needed to cover, from the line, TEs or Slots slipping into routes. Any defense aligned in a 3-4, as a base defense, relies heavily on versatility in the linebacker corp. While the inside LBs are allowed to run to the football in the 3-4, the OLBs, where Grayson plays, have to make plays as edge defenders out of the stand-up, two-point stances. Grayson, over the course of his sophomore campaign and so far as a junior, has exhibited the ability to rush off the edge, close the formation, or hold the point versus the strong-sided run, while exhibiting the ability to make plays as a cutback defender. Grayson possesses both the speed and agility to drop into coverage and take away the 10-15 yard out with his speed and length, while still possessing the closing speed to get to the swing and screen pass, or the sweep or stretch in the outside ground game.

Grayson attended the KPGFootball, All-State Mountain Combine this past June where Cook was awarded Top Honors at the Combine for his position. Grayson is one of the best pure athletes, both in the mountains and in the commonwealth of Kentucky, which certainly explains why schools like the University of Louisville and, now, Cincinnati, are hot on his trail.

Maybe the coolest thing about the two prospects visiting Cincinnati together, this weekend, is the fact the Bearcats are very interested in the two cousins. Is KPGFootball discerning an FBS, All-American Conference, package-deal-play? Maybe; that would certainly be a smart move by the Bearcats!