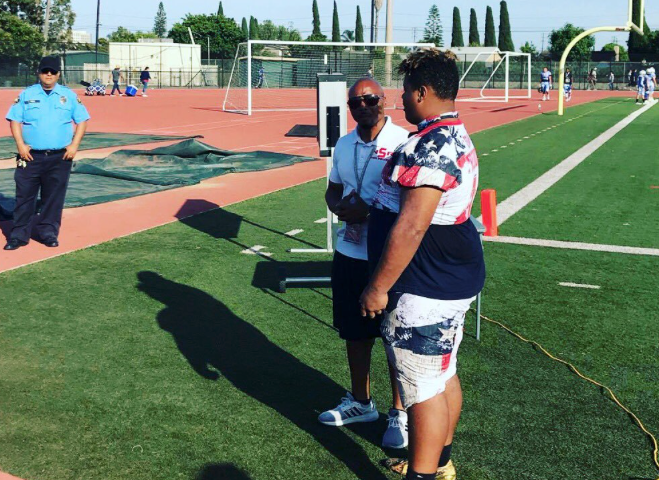 We love the offseason at KPGFootball. Judging by our “visits” statistic, so do many of you. We have more viewership in the offseason than in-season. We are willing to bet you readers (or advertisers) would have never guessed that!

It is a time of rejuvenation, a time of hope, a time to work on technique, strength, power, explosion, foot-work, quickness, speed, and all the other characteristics which lead to a football player’s maturation. KPGFootball advises young players, all the time, that they should look “anatomically different” each season, if they are taking proper advantage of an offseason’s development opportunities.

This anatomical difference can be achieved through offseason strength & conditioning training, playing basketball or baseball, competing in track or field events, it really doesn’t matter. What is important is the avoiding the “idle hands” dilemma. As was written in Divine Songs for Children (Isaac Watts, 1715) Be In Works of Labour or of Skill I would be busy too: For Satan finds some mischief still for idle Hands to do.

We here at KPGFootball pride ourselves in predicting for our subscribers tomorrow’s Kentucky high school football superstars. Some prognostications are easier than others. It doesn’t take any genius to predict KPGFootball Freshman All-State NG Jacoby Thornsbury is such a superstar both now and to come.

When we selected Thornsbury to our freshman All-State Football Team, we commented about a live stream of Ricco Hughes, Director of Future Star’s football. Hughes was streaming from Future Stars’ practice and KPGFootball, like thousands of others, was watching.

In the video, two Kentucky linemen were working on doubling Thornsbury, with one of the linemen charged with combo-ing up to the second level once Jacoby was overtaken by the offensive lineman’s “partner.” In such a drill, like in a game situation, a problem arises if the double can’t dig the target, or first level threat, out of the gap. Hughes kept saying on the video, No Sir, No Sir, Y’all ain’t moving Jacoby Thornsbury No-where! Those words, like so many spoken by Ricco Hughes, Kentucky’s lead talent evaluator in all the Commonwealth, proved utterly prophetic.

Belfry’s opponents didn’t move Jacoby Thornsbury no-where in 2018. They ain’t moving him no-where in 2019 either, we suspect. However, in 2019, Jacoby, provided he puts in the work this offseason, ought to start moving the interior offensive linemen some-where. That some-where is likely to be in the opposing QB’s lap.

As we before detailed in our article defending his selection to our All-State freshman team, Thornsbury played in 9 of Belfry’s 13 games, in a year during which the Pirates were 10-3. In that limited duty, Jacoby still amassed 20 tackles from his nose-guard slot.

For what we are looking from Thornsbury in 2019, at KPGFootball, is better leverage. We feel that is his next, and most logical, progression; working on his core sufficiently to enable his firing off the ball lower and with better leverage. Imagine the above Ray Justice picture with Jacoby under the center’s pad-level as opposed to having to with-stand an assault from a center with a “leverage advantage.”

Thornsbury, like he did throughout his freshman season, will still clog an “A-gap” in 2019, just owing to his sheer mass and leaded-behind. With better and lower pad-level or “leverage,” the center above depicted (and many others) will be “blown-up” in stead of just “stood-up.”

Thornsbury, in 2018, showed himself to be one of the premier zero-technique guys in his class (2022). He wasn’t being moved No-where. However, in 2019, we would like to see Jacoby be more than immovable; we want to see him completely caving in pockets and attacking backfields and additionally attacking, and doggedly pursuing, all those with the temerity to play in an offensive backfield while Thornsbury is slotted as the defense’s nose-guard or inside technique guy.

It’s great (and useful) that Thornsbury ain’t moving no-where; but it is time for him to be driving his opponent some-where. That some-where is backwards!