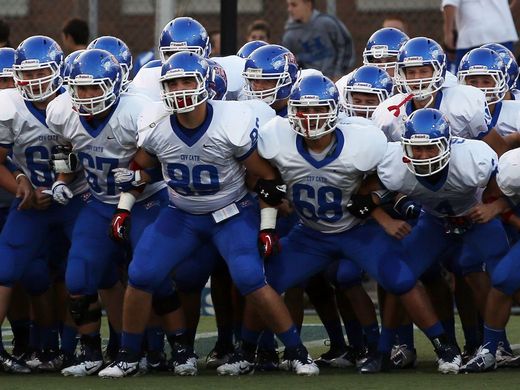 Well, what does a team do when losing its leading two rushers and one of those is an All-State caliber RB the likes of Casey McGinness? I mean, McGinness only rushed for 2,140 yards from scrimmage in Covington Catholic’s 15 games (14-1, State Runner-up to South Warren in Class 5A in 2018). McGinness carried the football 240 times, averaged 8.92 per carry, and scored 35 rushing TDs, so replacing him should be no problem whatsoever, right?

KPGFootball is not so sure. The second leading rusher last year for the Colonels was John Schuh, who gained only 181 yards on the ground for the year. Whether he is a star who just didn’t have the opportunity to shine or a 181-yards-a-season type RB is a moot argument at this point as he, too, is gone.

At KPGFootball, we don’t have the foggiest idea to whom Coach Eviston will turn to carry the football for his Colonel offense from the line of scrimmage this coming Fall. However, we have a fair idea who will be both triggering the offense and throwing the football at the QB slot for one of Class 5A’s premier programs.

There is really no other way to describe Caleb Jacob’s play in 2018, over the course of his sophomore season, other than splendid. Jacob completed 146 of his 224 attempts (65.2% completion rate) for 2,819 yards passing with 28 TDs to only 7 thrown interceptions.

Go ahead, we already know what you are thinking…If his play was so splendid, why didn’t he make the KPGFootball Sophomore All-State Football Team? The answer is we “screwed the pooch,” we missed, our selection committee contained humans (mostly), we don’t know any other way to “couch” it.

This is (in no way) a knock against either Aaron Hash or Brady Worley, as they were very worthy selections. It just appears we should have included a third QB on our team. Like we have said many times, this always happens any time one publishes an All-State Football team. There are always some pretty glaring omissions.

Caleb is 6-4 and weighs in at a reported 200 pounds with some room on his frame for offseason addition of “muscled sturdiness” to what appears to be a rather slender frame. While slender, we should reiterate here the kid is just a sophomore in high school. His play lent itself to that important fact being often forgotten. Quarterbacks are required to withstand quite a bit of pounding so never a bad idea for the QB to have some Cameron Jones, or Garrett Dennis-type thickness on the old frame.

Outside of his being skinny, there is nothing else about the kid to not love. He has a high and quick release, has the type of stature Division I prefers at his position, and the arm-strength to make all the throws. Luckily, in 2019, he’ll still have KPGFootball and AP First-team All-Stater, Michael Mayer, around to target down the field. So safe to say the Colonels will be able to throw it, just might take a minute to find someone to run it.

If there is one thing history has taught KPGFootball is that it has a penchant for repeating. Covington Catholic is perennially competing for championships, with rare instances where that wasn’t true, so we don’t expect different in 2019, nor should you. Regardless of what the Colonels have lost in the backfield, they have quite a fine center-piece remaining and will have him for two full, remaining seasons.

The best advice we can give Colonel opponents in 2019 is to get ready to deal with what’s remaining and not get too excited about what departed. Caleb Jacob plans to “step-it-up” in 2019 and, if we were you, we’d be getting ready for that. If his sophomore year is any indication, this kid ain’t nothing to play with…as a friend of ours is fond of saying.