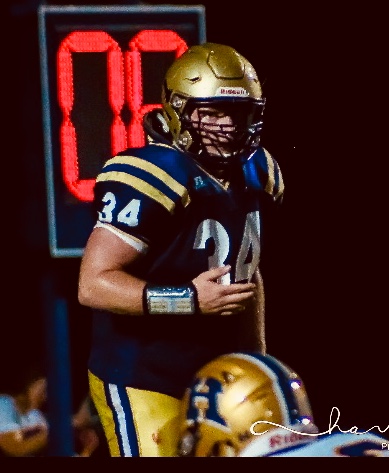 We have been big fans of Peyton Hatcher for years. We have featured him many times on this site and have even written a full article about him where we described him as “a football player.” Being so described by KPGFootball is “high praise” as that is a characteristic we have shown ourselves to prize. Peyton Hatcher committed to play for Campbellsville University today and will sign at the high school, in Somerset, Kentucky, next week. “Committed” is a good word for Peyton Hatcher. The word, “committed” just sort of captures the essence of Peyton Hatcher. As a matter of fact, it is the one word we would use to describe Peyton, if we were permitted the use of only one word.

Peyton is committed in the class-room. Peyton, a full qualifier, was actually a “student” before being an “athlete.” As schools are clamoring for “student-athletes” about whom they won’t have to worry about their maintaining academic eligibility, Hatcher must have been quite the prize for this year’s Tiger recruiting efforts. Peyton has a 3.4 GPA, at Somerset High School, and a registered 25 on his ACT.

Peyton is committed to training and, thereby, becoming stronger, more powerful, more explosive, and ever-quicker. Peyton won his weight class at last year’s Kentucky State Powerlifting Meet and has repped the NFL, combine weight of 225 pounds, on the bench press 25 times. According to the one-rep, bench press maximum lift calculator, that would make Hatcher’s approximate, one-rep bench-press around 410 pounds. The 5-10, 215 pound LB has a registered 40-yard dash time of 4.87 seconds and he has run the pro-agility shuttle in 4.3 seconds.

Peyton is committed to tackling ball carriers, like one would need from a college linebacker. Somerset played 14 games over the course of Peyton’s senior season. Peyton helped lead the Briar Jumpers to both a Regional Championship and a birth in the State-semis.

In 2018, Hatcher had 145 tackles over those 14 games, with 21 tackles behind the line of scrimmage, 3 QB sacks, and 9 QB pressures. Additionally, Peyton Hatcher caused 4 fumbles, recovering 2. Perhaps his most impressive statistic was his only missing 13 tackles, on the year, over his 14-games played. When Peyton breaks down on a running-back to tackle him, Hatcher is not only committed to getting the RB to the ground, but that is exactly where the running-back will be when Peyton is finished with him.

In committing to Campbellsville he joins the Mid-South Conference’s “Bluegrass Division.” The Mid-South has been described to KPGFootball as “the SEC of the NAIA.” The Tigers, who play in one of the premier conferences, are committed to playing football at that conference’s very top level. The Tigers had a tough 2018 campaign, going 4-6 overall and 3-3 in conference; but they were 8-2, in 2017, going 4-2 in conference that year.

So Peyton Hatcher has committed to Campbellsville and the Tigers are equally committed to him. From where we are observing the proceedings, this match looks like it has the chance of being one made in heaven for both involved parties. Campbellsville is getting one “committed” individual and Peyton is getting one Hell of an opportunity, academically and athletically. This arrangement looks like it may work out swimmingly for both parties. That is, as long as each party to the deal remains “committed” to the other.