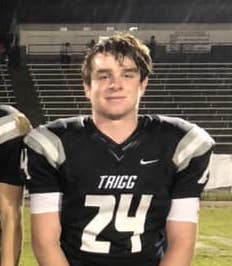 There are those who may profess a bit of dismay at the chosen title. What in the world does KPGFootball mean by “…Bleidt, working hard offseason to break out in 2019?” What would you call what he did in 2018?

Well, to those who might be inclined to that reaction we say, “Touché.” After all, it is a point fairly made. Cade Bleidt, as his junior season highlights would definitely detail, had quite a season.

Now, Bleidt is a two way player who doubles as a fullback on offense. On offense, he is primarily used to pick up blitzes and lead block on the “iso” and “power” plays. We aren’t trying to diminish his 6 carries for 38 yards, or his lone reception for 22 yards, in 2018 as “when called upon,” he delivered. However, his “true value” for the Wildcats was more easily evident on defense, where he is quite accomplished.

Still, Cade Bleidt isn’t satisfied. Cade knows he can do so much more. Most importantly, Cade is committed to working offseason to insure his play reaches new heights for his senior campaign.

Now, I had a chance to talk with someone connected to Bleidt, last evening, while researching for this particular article. Bleidt is bench pressing 260 pounds, at present, and power-cleaning 265 pounds as a member of Trigg County’s Power-lifting team. Trigg’s Power-lifting team is accomplished, storied, and one for whom Cade has before won 2 State Power-lifting Championships since participating as an 8th grader.

Now, if you will look at the provided color-coded graphic above, you will see Cade finished runner-up last season, at the 38th Annual Kentucky State Power-lifting Meet, at his, then, 155-pound weight class. His combined lift (bench + power-clean) was 440 pounds and he finished second to The Great One, Daniel Foor. Foor was a four-time State Power-lifting Champion at 135-pounds (once), 145-pounds (twice), and 155-pounds (2018). Now, Bleidt’s bench + power-clean, right now, is a combined 525 pounds. At his present weight, Cade would figure to be the State Power-lifting Champion (for the third time, dating back to middle school) at his new weight of 165 by 15 pounds, assuming the performances this year are the same as last.

Now, we aren’t saying 525 pounds, combined lift, takes the 165-pound weight class in 2019, though it would have last. There is no legitimate way for us to make that prediction. We have provided the color-coded graphic to give some context to what we are going to next contend.

Cade Bleidt is among the very best in Kentucky in power, strength, and explosion for a 165-linebacker. Does that make him a great football player? We think it certainly helps as football requires strength, power, and explosion.

As the game of football is widely regarded as requiring those physical traits, it stands to reason, to KPGFootball at least, that a game requiring those attributes would be better played by participants possessing them. Powerful, strong, and explosive people are physically suited to play a game which requires, by the nature of what is physically undertaken over the course of play, people who are powerful, strong, and explosive. What are we missing here (denote sarcasm)?

We understand there are those who would argue not all power-lifters are good at football. Regardless of what the power-lifting detractors would or wouldn’t say, every football team in the land, from high school to the NFL, spend the off-season weight training. If it wasn’t important, they all wouldn’t have “as state of the art equipment as they can afford” sitting in field-houses across this great land expressly stocked for that purpose.

If some of you coaches out there still believe lifting in the offseason isn’t important; then quit doing it. Sign your team up for aerobics, yoga, and pilates and we shall see how you fare next Fall against the power-lifters.

Cade Bleidt is drastically stronger, more powerful, and more explosive, right now, than he was at anytime during the 2018 season. While he certainly played well in 2018, KPGFootball wants to be the first to exclaim, you ain’t seen nothing yet, with our apologies to Bachman–Turner Overdrive. Bleidt is putting in the time, he’s putting in the effort, he’s reaping the results, and the benefits will be harvested by the Trigg County Wildcats. He’s putting the “Hay in the barn,” as Cy Dossett likes to say, and, in 2019, Cade Bleidt will be getting paid (figuratively and not literally)!