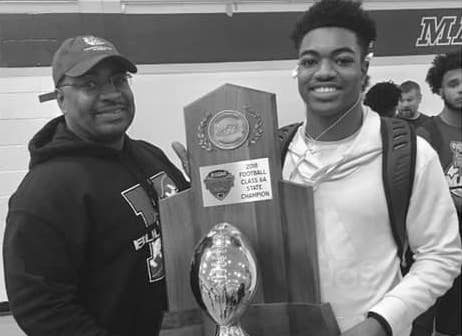 Way back on August 3, 2018, KPGFootball broke down the top 17 rising Freshman Footballers in Kentucky. One of those players whom we may have grossly undervalued, and we had him 4th in the entire Commonwealth, was Male’s Vinny Anthony, Jr. As a matter of fact, his picture which is to the left of this paragraph, was the featured photograph for the entire article. Foreshadowing perhaps? Well, it would appear so, wouldn’t it?! To refresh your recollection about our impressions coming into the year about Vinny, which you may read yourself by hitting the above link to the actual article, we related that KPGFootball believes Vinny, a.k.a. Vincel Jr., to be Kentucky’s top WR prospect in the Class of 2022. He will attend school at Louisville Male and…he will play on Friday nights.

We have heard, in our travels around Kentucky, all manner of craziness when it comes to the relationship between a top-flight middle school program, with Team Kentucky-caliber, rising ninth graders, visa-vie the future success of its varsity football program. There are high school coaches out there who roll their collective eyes every time KPGFootball elaborates on one of these phenoms. You get the patronizing, well I am sure he’s pretty good for a middle schooler but this isn’t middle school. Of course, many of them coach varsity football teams which couldn’t stay on the field with either Team Kentucky’s FBU or Team Kentucky’s Future Stars teams, so why they believe anyone gives a farthing what they think is beyond us. Anyway, the simple fact remains, if you are an elder statesman on a high school football team, you would be wise to hit the weight room and continue to work on improving because there are places where rosters are being re-stocked with 9th graders whom are both better at football and better athletes than you. The physical difference between 14 and 15 year olds and 18 year olds is lessening all the time. Like, Louisville Male’s Vinny Antony, Jr. par example.

Anthony was running a fully automated 4.7 second, forty yard dash before enrolling at Louisville Male. Not only did Anthony find his way onto the field for Male as only a freshman, he was close to being Male’s MVP of the 6A State Football Championship Game this past weekend against Scott County in Lexington, Kentucky. Vinny stepped into the starting line-up in place of an injured senior and played every bit like he was the senior. Anthony gained close to 100 total yards and scored 2 TDs in a game Male ended up winning 37-20. In a 17 point margin Championship Game, the importance of getting 12 of the points from your freshman slot just can’t be overstated. So the really good news for Male Bulldog fans, going forward, is they get three whole more years of this. The really bad news for the remainder of Class 6A football, particularly those teams in Class 6A, District 3, is they get three whole more years of this too.

We are very proud of Vincel Anthony, Jr. though not as proud as Vincel Anthony, Sr. undoubtedly is. We are very proud of the fact our projection of his impact on the roster for a team which both doesn’t play freshmen and which would come to finish both 14-1 and as State Football Champions in Kentucky’s largest classification couldn’t have turned out anymore on the money. So the next time we attempt to tell a high school coach how much a Team Kentucky-caliber, rising 9th grader may be about to impact his depth chart and he wants to argue with us…someone tell him, politely if possible, to shut his mouth, the experts are trying to teach him something.