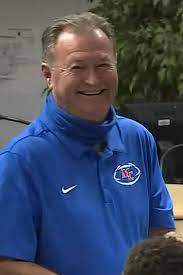 The Cheshire Cat: That depends a good deal on where you want to get to.

Alice: I don’t much care where.

The Cheshire Cat: Then it doesn’t much matter which way you go.

The Cheshire Cat is a fictional cat made popular by famous novelist, Lewis Carroll, in Alice’s Adventures in Wonderland. Cheshire Cat is known for its distinctive mischievous grin.

Unlike Alice, the Madison Central High School Indians know exactly where it wants to go, straight to the top of Class 6A, District-8. They have hired the right “cat” to get them there.

There are some around the Eighth-District of Kentucky’s 6A Classification claiming they too have seen the famous mischievous grin of one of the more famous characters in the Lewis Carroll novel known as the Cheshire Cat. The cat whose grin they claim to have seen around campus is named, Mike Holcomb; and he is fast approaching 300-career wins with three titles already on his résumé.

It would be our recommendation people start taking notice of what is happening down on the Madison Central reservation. The Tribe, as they are known, have been playing some outstanding football this season.

The Indians stand at 3-1, with its only loss being a 9-point deficit, at home, to a visiting LCA team. LCA is, with little debate, among the very best football teams in all of Kentucky, regardless of enrollment size.

Since dropping that opener, Madison Central has traveled to Lexington and beat Dunbar by ten, accepted a forfeit from Madison Southern, and pasted South Laurel by 63-points. Ouch!

Looking at the team’s remaining games, the Indians should be favored against Lexington Layfayette, will play an Oldham County team in a “pick ’em” game where either could come out on top, will be favored over George Rogers Clark (GRC). The remaining three games, Pikeville High School (1A), Bryan Station (8th-District favorite), and Southwestern (5A) are games where they figure to be double-digit dogs.

If they take care of the games they are predicted to win, the Indians slide into the playoffs 6-4. Before anyone says “so what,” remember; this is a program which had won 2 of its previous 20 games coming into ’21.

However, one would be exceeding foolish to count out a Holcomb coached football team regardless of how daunting the opponent may appear. As an example, Madison Central entered the opener with LCA a nearly 40-point underdog, according to the calpreps.com algorithm. Have we mentioned the margin was nine points? I am sure we have.

What makes betting against the Indians such a dicey proposition is the influx of fine young talent, the athleticism of its roster, and the first-class, coaching being administered within its program. Basically, the Indians have amply demonstrated the tribe shouldn’t be counted out of any game regardless of what the pundits think.

The Indians have two of the more dynamic sophomores in the ’24 class in Brady Hensley and Kenyatta Hardge. Both of these players are among the many athletes this magazine has before covered. We first featured the pair when they were still in middle school. We’ve been on them a while.

Hensley counts a 79-yard “scoop and score” among his many points logged this year. Get this; Hensley is also fifth on the team in tackles.

Hardge is second on the team in rushing TDs and scoring. Hardge is among the defensive leaders in tackles for loss (TFLs), trailing only Edgren Sweat (’22) and Kyran Jackson (’22). Hardge was described to us by an LCA coach we interviewed after LCA’s having played the Tribe.

It is our job to alert subscribers about story lines before anyone else. We called Trinity struggling and that Woodford County would be tough both before the season started. We called Mayfield being back to its normal production, preseason. We predicted Russellville would resurge at the same time we made our other predictions.

We aren’t always right. We are right way more than wrong.

We are alerting you today to the fact there is an uprising brewing on a certain Richmond, Kentucky reservation. The Tribe is getting ever restless. War paint is being applied and the Indians are mounting-up, readying for war.

The cat who appears to be coordinating all the drum beating and preparation for battle is a man with whom Kentucky High School football fans, and certainly we, should be familiar. It looks like the rabble rousing down on the reservation is being spear-headed by a Hall of Fame head football coach we all appear to know pretty darn well.

Yes sir, ole Mike’s smiling like a Cheshire Cat. Wouldn’t you be?