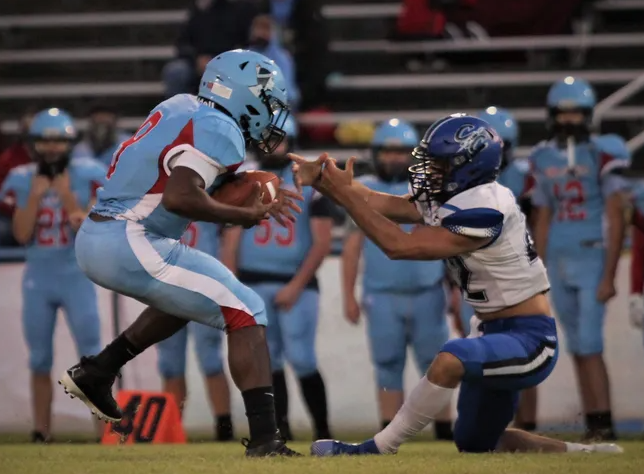 Like we did last week and will continue to do in succeeding weeks, we will go around the commonwealth of Kentucky and update, on Mondays, the performances we believe to be jerky-worthy. We had some really fine team and individual performances for the fourth week of competition in the KHSAA.

Hopkins County Central ran its record on this past Friday night to 3-1 with a date against Ballard Memorial upcoming to run it to 4-1 should they be able to overcome the intended raid from the “Bombers.” Against a tough Todd County Central team, which the Storm overcame in overtime 54-52, ’22, QB Adrian Stringer was 23-42 for 448-yards with 5 TDs.

KPGFootball caught up with Central’s Offensive Coordinator. Coach Mike Evans told us The Storm played a little Mumme-ball against the Rebels. Todd County Central’s record evened at 2-2 with the tough loss.

Ryan Rayno and Logan County are among the hotter teams in 4A right now. The Cougars overcame Class 4A, Franklin-Simpson, Friday night on the strength of Ryan Rayno’s (’23) 128 yards on only 14-carries with 1 Rushing TD.

Davin Yates (’24) had an interception. Logan County has moved its record to 3-0. The Cougars entertain Class 5A, Greenwood, at home this coming weekend.

Estill County is rolling. They are 3-0 with wins over Powell County, South Laurel, and Friday night’s road win over Dayton, 50-8.

Senior QB Ty Niece (’22) showed why he is among the best athletes in his graduating class. Niece completed 6 of 10-passes for 122-yards and 2-TDs. Niece also carried the football 8-times for 14-yards and another score. Niece had four (4) tackles on the evening to go along with his production on the offensive side of the ball.

Braeden Waddle (’23) went straight off on Friday night with 15-tackles to his credit. Jeremiah Stephens (’23) had 7-tackles but two (2) of his were QB-sacks. Dustin Beeler (’22) converted both his PAT attempts and recovered a fumble.

Davies County’s Joe Humphreys (’22) completed 30 of his 50-passing attempts for 351-yards with 2-TDs against Floyd Central in Floyd’s Knob, Indiana this past Friday. The 21-14 overtime win ran the Class 6A, First-District Panthers’ record to 3-1.

Sean Higgs (’23) was perfect (3 for 3) in PAT attempts. Jack Ball (‘23) sacked the QB twice on the night to pace the defensive unit in that category.

Cole Lanter (’22) had quite the evening in Boyle County’s 48-14 beat down of Class 6A, First-District, Henderson County. Lanter caught 5-balls for 141-receiving yards with 3-TDs receiving.

Jagger Gillis (’22) threw for 190-yards and 3-TDs while contributing 25-yards rushing and chipping in 7-tackles on defense. Avery Bodner (’24) came close to eclipsing 100-yards on the evening, gaining 96-yards from scrimmage in only 8-carries with a rushing TD.

RB, Jovari Gamble (’22) had 158-yards rushing with 3-rushing TDs on 13-attempts in Russellville’s 41-7 route of Class 4A Warren East. Not too shabby for a Class 1A team. In addition to leading Russellville in rushing, Gamble caught a pair of passes for 70 receiving yards and a TD.

Jaquis Todd (’22) had the team’s lone pick-six, an interception he took 36-yards to the house. Russellville is 3-1 with a trip to Franklin-Simpson, another Class 4A foe, this coming Friday night.

Perhaps Madison Central’s defense should get its own shipment of beef jerky products. The Indians defense surrendered negative 28-yards rushing while its offense gained 292-yards over the ground.

Brady Hensley (’24) had 2-rushing TDs and Kenyatta Hardge (’24) carried it across the goal line 3-times in route to the team’s logging 8-rushing TDs on the night. Madison Central is 3-1, the winners of three straight, and traveling to Lafayette this coming Friday night.

Mason Lawson (’23) gained 185-yards rushing with a TD in only 12-carries in Johnson Central’s overtime 42-36 win against Cahokia, Illinois. Lawson, a two-way star, also paced the defense with 11-stops.

Those were just some of the amazing performances which stood out to us. There were others which were either just as fine or certainly close. One of the above may be our award recipient this week.

Keep fighting ballers. Your week just may be upcoming.