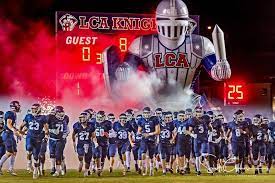 One of our favorite songs at KPGFootball is Charlie Daniels’ The Devil Went Down to Georgia. There is a poignant moment in the story of its lyrics were the Devil is forced to bow his head and lay a golden fiddle at Johnny’s feet. You see, the Devil was forced to acknowledge Johnny, the song’s protagonist, was the best that’s ever been.

We are at the precipice of having to lay a golden fiddle at the feet of Coach Doug Charles and his LCA (Lexington Christian Academy) Eagles. Maybe at the end of this season, should things work as we believe, we will get to utter the famous lyric, I done told you once, you Son of a Gun, (LCA’s) the best that’s ever been!

If we get to that point, we would have told you once. We’re telling you today.

We are approaching the regular season’s half way point. By now, there are questions being asked by coaching staffs around the commonwealth. There is likely some deep soul-searching and self evaluation ongoing.

There are questions being asked around the coaching staff at Lexington’s Christian Academy too. The question being most asked, at least around the offices of KPGFootball, is simply this: Are Doug Charles’ Eagles the best 2A football team in Kentucky High School history?

We believe the answer may be yes. Allow us to make our case.

Let’s look at the body of work to this point. LCA has beaten Madison Central (Class 6A, District 8) 21-12 in Richmond. They beat Boyle County, the defending Class 4A state champion in Danville 35-28. LCA just rolled Christian Academy-Louisville, this week’s top-ranked squad in Class 3A, 37-14.

Of the three teams it has beaten on the field, the “dog,” if you will, or the highest ranked and lowest regarded Kentucky team is Madison Central. Coach Holcomb’s squad is “red hot” and ranked the 39th best team in all of Kentucky High School, football regardless of classification.

LCA was awarded a win over Belfry owing to Belfry’s being in quarantine at the time the two were to play each other via Kentucky’s COVID Cancelation-RPI policy. The computer algorithm we rely on and say more about below says LCA was going to win 58-0 had the game been played.

Being awarded a 1-0 win by forfeit was doing the Pirates a solid. All told, the Eagles soar at 4-0.

There is an algorithm odds-makers around Kentucky use commonly to predict the outcome of high school football games. We believed it once to be a dead-on forecaster of Kentucky High School football.

In the pandemic days, it has shown some flaws. It doesn’t account for “players available” to play versus “first-stringers in quarantine.” Other than that, it is still “the best thing going.”

MaxPreps uses the algorithm. So do we.

According to MaxPreps, LCA is the 4th-best football team among all of Kentucky High School football’s 223 teams. MaxPreps sees the top-four Male, Trinity, Corbin, and LCA in that order.

Now the computer says Male beats LCA on a neutral field by 18-points. Male may win the game. We don’t believe it would be close an 18-point margin.

What about Beechwood, 2A’s other “contender” this year for the title in 2A and 2A’s defending champion? Well, the algorithm says LCA beats Beechwood on a neutral field 28-20.

This matchup will take place we believe. That is if Kroger Field is considered a neutral field. After all, Lexington is the L in LCA.

LCA has as many Division I prospects on its roster, and in its lineup, as any team in Kentucky. We won’t attempt to name them here.

We have before discussed and featured them. We don’t want to omit anyone by accident. Some of the ones about whom we are talking are featured in photographs appended to this very article.

So here it is…the question remains…is LCA the best Class 2A football team in Kentucky history? Well, honestly, we don’t know YET.

We believe there is time to further build the résumé. LCA still has remaining appointments with Lexington Catholic (KY, No. 10), Pikeville (KY, No. 16), Danville (KY, No. 40), and Henry Clay (Class 6A, District 7). There is also that looming appointment with Beechwood (KY, No. 11) in the 2A championship game.

Should they run the remaining gauntlet and win the whole thing, we believe the answer becomes elementary. Fire on the mountain, run boys run!