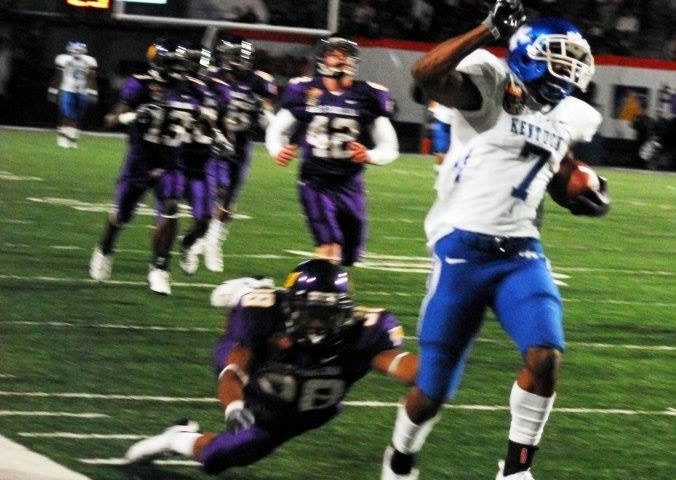 We have just awarded to David Jones, formerly of Phelps High School and rumored to be connected to a big time opening in Kentucky High School Football, the “KPGFootball High School Football Coach of the Year” for what he accomplished coaching the Hornets over the 2018 season where Phelps reached before unprecedented heights under his direction. You may see that article by hitting this link. Well, low and behold, while watching the National, pre-game, broadcast of the Citrus Bowl, David Jones was featured on ABC.

The mention surrounded the answer to the trivia question…

“UK has returned only one kick for a TD in a bowl game. When was it and who returned it?” Well, being closely acquainted with Coach Jones, KPGFootball knew right off it was the 2009, Auto Zone Liberty Bowl in which Jones returned a kick 99 yards. That return has now been a Liberty Bowl record for longest kick return in Bowl history for a decade.

We are thrilled David Jones is getting this type of national attention and promotion, especially with his being the candidate for several high profile, Kentucky High School, football coaching jobs. Congratulations, David Jones, from your friends at KPGFootball.

Reporting for KPGFootball, this is Fletcher Long reminding all the Ballers out there to follow Coach Jones example and PLAY THROUGH THE WHISTLE!