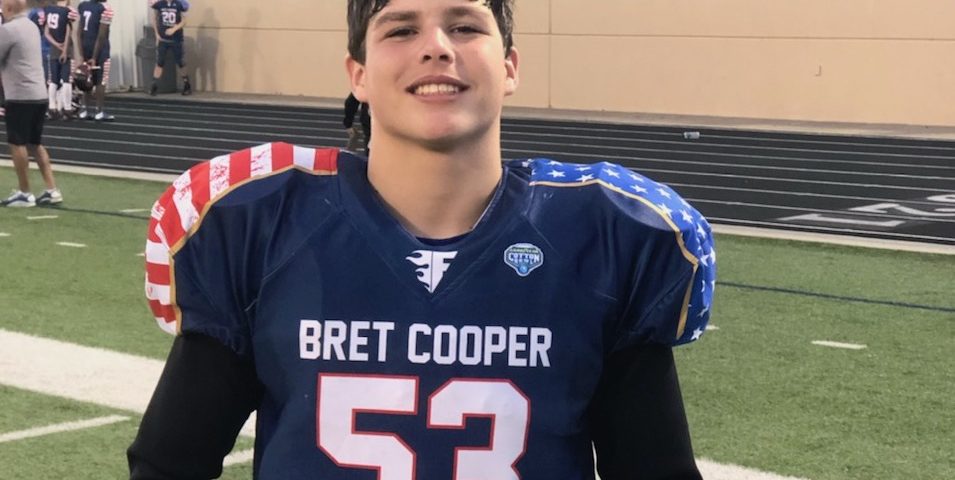 First of all, Happy New Years to every one of you. KPGFootball hopes every one of your 2019s are filled with joy, happiness, fulfillment, and prosperity (however prosperity is personally defined by you). New Years Day is a day where millions of people asses themselves and where they are and resolve to do things differently and, just perhaps, better than they did it the year previous. KPGFootball is no different in that regard.

The reason we never include that is KPGFootball is a magazine about football players. All superstar football players are expected to take care of fulfilling any school’s academic criteria in order to maintain the privilege to play this great game. When you throw the word Academic in the Bret Cooper Game’s title, we feel it leaves one with a false impression. It is similar to the Ms. America Pageant. Sure, the Pageant includes scholarship amongst its principle criteria; but c’mon, people tune in to regard the statuesque, singular beauty of the contestants, not to watch them defend their dissertations.

The players who are invited to participate in the Bret Cooper are football players, and amongst the very best football players at their respective stages of development in the entire Country. Sure, they all have GPAs at 3.0 (on a 4.0 scale) or higher and colleges are keenly interested in that, but we attend, coach in, cover, and listen to the broadcast of the game because they are brilliant football players. There is no spelling bee at halftime and, if there was, that’s when KPGFootball would leave.

Back to the point of this article, New Year’s is the time to assess where you are and resolve to improve. As KPGFootball both watched and listened to Kennie Long’s broadcast on NYSR (National Youth Sports Radio-they aren’t there for any half-time spelling bee either), it occurred to us the performances turned in by Kentucky’s JT Adams (2023, Hopkinsville, KY) and Joshuah Keith (2024, Hopkinsville, Kentucky) may require our re-assessing how KPGFootball has rated both its 2023 and 2024 prospect classes. Now, our lists are called prospect lists but we value playing the game over potential and frame so, any list of prospects on KPGFootball, is really ranking present players over future prospects.

Both Adams and Keith are rated the 2nd best football players in the graduating classes in which they are both enrolled. Coming into the New Year, the number one prospect in the Class of 2023 was Carson Wright from Pike County; and, in 2024, the number one was Cole Hodge from Oldham County.

Adams went out this week at the Country’s most prestigious, Junior All-American Football Classic, the Bret Cooper, and won the Ron Cohen Award (Leadership, Courage, Commitment) for his work leading up to the game and Defensive MVP for the East All-Americans for his work in game. In a game where the West All-American offense pounded away at the East Defense until the East just didn’t seem to want anymore, Adams fought right down to the bitter end with big hit after big hit. Adams is a true champion and his performance, playing for a team which lost 42-0, put that fact on full display.

Joshuah Keith, while only 13 years old, was good enough to draw the start in the 13U game and play significant snaps in the 15U game. First of all, it appears the East forgot to bring a true center, and ran the entire day from out of the Pistol/Spread formation. The snap was an issue all day for the East and really stymied all its offensive opportunities. All-Star teams most often forget to select a true center and are forced to ask an interior lineman to perform the chore. The problem is the one saddled with the obligation in the All-Star game is, often, one whom is unaccustomed to reliably delivering a football to a QB five yards behind him all while a 300 pound nose is doing his best to de-capitate him. Damn few players are capable of doing this.

The past two years the East team has been very well situated at offensive center. Two years ago it was Eric Cisneros from Midland, Texas. Cisneros, a member of the National Select Football Team (Team USA), played center regularly both for Team USA and at his high school (Midland Lee). Last year, the East had Cameron Stokes from Knoxville, Tennessee. Stokes was Tennessee’s top rated center in its Class of 2022 and, maybe, the best center at that level of play KPGFootball has ever before seen. The failure to have either a Cisneros or Stokes on the East team was an obstacle the East found itself incapable of overcoming.

That aside, and with the snap being a regular “hot potato” all day, Keith still was able to move the pocket, avoid the rush, and hit receivers down the field, in the hands, time after time in the 15U game. That doesn’t mean the receivers caught any of these aerials but they certainly both could have and should have. Having a constant onslaught of pressure both in your face and off the edge, with a snap which could go anywhere and often did, while playing in a game you’re neither old enough nor big enough in which to play, didn’t stop Keith from showcasing his immense ability on the day to the eyes which mattered, the talent evaluators whom had come to Dallas to expand their site’s data-bases.

So, here it is…2019…and KPGFootball has before it a quandary as to whether it needs to shuffle the 23 & 24 decks, if you will. Perhaps we need two new number ones. Certainly, this is something we will be evaluating and soul-searching as we resolve to improve our service to you, our consumer base.

Reporting for KPGFootball, this is Fletcher Long reminding all of Kentucky’s best football players we are omnipresently watching your every move. Don’t forget to PLAY THROUGH THE WHISTLE! Happy New Year!