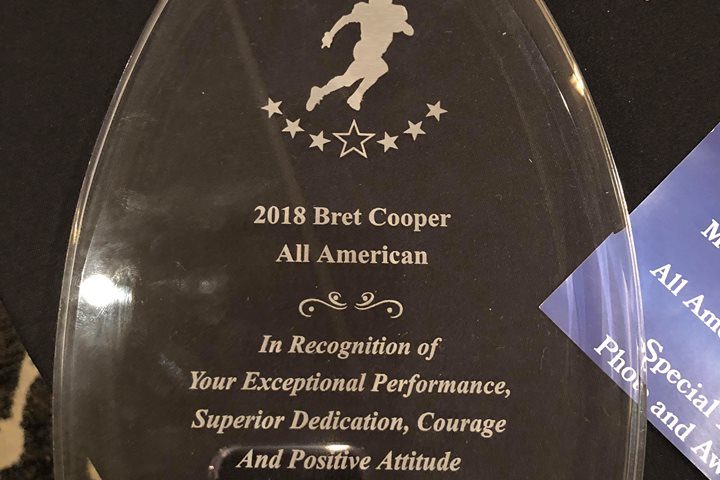 Well, it was a huge night down in Dallas, Texas for the Kentucky players selected to and playing in the Bret Cooper Junior All-American Classic. It is well known across the Country that Kentucky plays a superior brand of middle school football and has some of the better individual players, at that level, anywhere in the America. Both of those facts have been recently evidenced by Team Kentucky‘s finishing 5th nationally in the recent FBU Elite Middle School National Championships in both the 7th and 8th grade tournaments. Additional evidence of Kentucky’s prowess was entered last night at the Bret Cooper All-American Awards Gala. We will attempt to give you a run down of the respective awards given the Kentuckians.

JT Adams of Hopkinsville, Kentucky is no stranger to decoration. In fact, this is one of the most decorated, middle school LBs in all the Country. Adams has before been awarded the Defensive MVP of the Tennessee-Kentucky Future Stars Classic and, last evening, was awarded the Ron Cohen Award for Exceptional Football Performance, Dedication, Courage, and Positive Attitude. In addition to being an All-American, JT is a KPGFootball, Middle School, All-State Football Team member and rated the No. 2 overall prospect in Kentucky’s Class of 2023. Congratulations to JT.

Andrew Nason, from Hopkinsville, Kentucky, rated the 5th overall prospect in Kentucky’s Class of 2024 is a player who has the versatility to play offensively at QB and defensively at either safety or corner. Nason, fresh off playing for Team Kentucky’s 7th grade FBU Elite Squad was awarded the Pat Tillman Trophy for excellent play by a defensive backfield player.

Elijah Gayhart, who also was selected by KPGFootball as a first team, All-State Middle School Football player in 2018, won the Troy Polamalu Trophy for his outstanding play in the defensive backfield. We aren’t the least bit surprised by this awarding as he also took top honors last summer at the KPGFootball, All-State, Mountain Combine for DB play at his grade level. Elijah is from Perry County, Kentucky.

For the second year straight, the Luis Fernando Zendejas Award to the Classic’s top kicker has come back to Kentucky; this time in the possession of Colin Fratus from Bowling Green. Fratus won the Tennessee-Kentucky Future Stars Classic for Team Kentucky this past summer at Georgetown, Kentucky; was selected to the Team Kentucky FBU Elite Team; was selected as the 7th, overall, best Kentucky football prospect in the Class of 2023; was selected to our Middle School All-State Football Team; and was chosen as the nation’s top place kicker, in the Class of 2023, by the National Football Foundation’s, Pro Football, Hall of Fame Academy. In addition to the Zendejas, Fratus likewise was awarded the Tee Ofahengaue Award.

In what may have been the least surprising award of the evening, the 13 year old QB from Hopkinsville, Kentucky, Joshuah Keith; who has been favorably likened to Russell Wilson by coaches, The Appalachia Prep Combine, TNRecruitStatus, and KPGFootball all week long; won the Russell Wilson Trophy. Joshuah is one of only two 7th graders, in all of Kentucky, to have been selected to the KPGFootball’s Middle School All-State Football team. Joshuah won the Outstanding QB Award at Murray State University‘s football camp last summer, 7th-12th grade. Joshuah is ranked number 2, overall, as a football prospect in Kentucky’s Class of 2024.

We don’t believe this to be all the awards the Kentuckians garnered last evening and we have our sources digging into the remainder. We will tell you now that our sources indicate at least two Owensboro kids were singled out at the Gala last night, so this is a developing story which will continue to be updated until we are fully apprised.

Reporting for KPGFootball, this is Fletcher Long reminding all the Bret Cooper All-Americans to PLAY THROUGH THE WHISTLE!