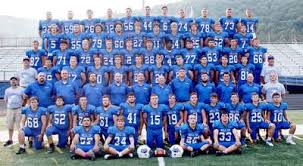 We went around the commonwealth for the games which will be played tomorrow night and selected some interesting matchups to predict. The following games are the games on which we decided to prognosticate outcomes.

This game pits the 3rd ranked team in the 2A classification (Breathitt) against a 2-2 ball club in Class 3A with a RPI of .51934 (Greenup). The spread on this one figures to be in the 25-30-point range, 25-points on a neutral field adjusted for the game being in Jackson, Kentucky makes us think the margin will be 28-points on Friday night. Games are about matchups. This matchup is much more favorable for Breathitt than going on the road and playing run-heavy, Floyd Central in Prestonsburg as Breathitt was scheduled to do earlier in the week. Greenup lost 16-seniors from off a 2019 team which went 4-7. Of the sixteen, one of them is playing QB, on full-ride, for Marshall’s Thundering Herd in the FBS, Division I (Eli Sammons). Little brother, Mason Sammons (54) leads the team in both TFLs and sacks; in fact, “little” Sammons has the team’s only QB-sack so far this season. Too bad he can’t throw a football. We believe Breathitt rolls on The Riverbank here.

This game features two ranked opponents in this week’s AP poll. Catholic is ranked 7th and Hancock County is ranked 9th. Hancock County has one of the better 2023 bevy of prospects of any roster on the western end and Catholic has the best coaching staff (maybe) in Kentucky. Time to find out if Hancock is a pretender or contender.

Knott County has been off for weeks as a “red” county. There almost has to be some rust. Leslie has been in the “red” too including right now. They don’t care what the Governor or Commissioner recommends, they’re playing. Big game with play-off seeding implications on the line in district 7. Leslie has the superior roster talent, LB, Preston Spurlock, Class of 2021, is the team’s all-time tackler with 403-career stops.

Somehow the loss of Beau Allen off last year’s team hasn’t impacted the squad’s play as much as we forecasted preseason. Bourbon has played much better since Coach Jones and staff have arrived. Are they ready for a test like this? Nope.

Hoptown is another team just coming off of quarantine. The last time out they look like death eating a soda cracker. Look for the Tigers, whose performance has been “up and down” so far this season to be up this week. Logan is no push-over but we believe Reece Jesse, Jr. will come out and play like the Mr. Football candidate he is.

Coach Robbins has the Rebels playing well this year and they are WAY better than predicted preseason. How in the world statewide forecasters had this Rebel team predicted 5th in this 5-team district (us included) looks rather silly now midseason. McLean is reeling from the blowout loss to Owensboro Catholic. Can they right their ship this week? We think so, but it won’t be easy.

This team pits two 5A teams which are historically tough customers in that classification. Owensboro has the type talent to win the whole thing, though they struggled mightily with 2A Owensboro Catholic last Friday night. Oh well, what else is new? They always struggle with Catholic just like Graves losses almost every year to 2A Mayfield. It just sort of happens. Talk about LBers, Senior High’s Austin Gough may be the best MLB in Kentucky. That Gavin Wimsatt (QB, Kentucky offer, OHS) ain’t too bad either.

Well this is the matchup toward which many have been pointing all season. It pits two of the top teams in 2A who, unfortunately, are in the same district with each other and Danville, another top 2A team. We have said all year LCA was better than Somerset but the Frederick Douglass blowout (Douglass 40, LCA 6) has shaken our confidence in this team if we’re being honest. We still think they are better than Somerset. Guess we are about to find out. LCA, we picked you to beat Douglass and you made us look like fools. Don’t shame us again, we’re giving you one last chance!

Greenwood is undefeated on the year. South Warren says “whoopity-damn-do.”

Taylor County would like for you all to know they are one of the “Big Boys” in its classification now, being listed among the “others receiving votes” in this week’s 3A poll. Glasgow has historically been either ranked or in the “others…” list in the 3A poll, weekly, for years. We think Taylor County proves something Friday night.

Verona is a tough customer. Shawnee is terrible.

Coming off the Hoptown win, folks around 4A are still trying to figure out how good Calloway really is. Heck, there are media members voting for them as a 4A, weekly top-ten team (not us). North-Hopkins couldn’t overcome Hopkins-County Central and at home! Calloway is 2-1 and is favored in this game. Can you even imagine a world where Calloway County is favored to go on the road and beat the defending district and regional champion? We are living in such a world right now. Strange times are these.

Okay, Colonels, you had us drinking the cool-aide when you beat North at North. Then everyone started beating North at North, including 4A, First-District’s historical “little sister of the poor,” Hopkins County Central, who lost to Todd County to open the year. Bowling Green showed us “what’s what” in pasting McCracken County by sixteen last Friday night. This one is going to be a runaway “Mississippi boat ride” for “The Outlaw Josey Wales” fans out there. We think BG could win by 50. Coach Spader won’t do his buddy, Steve Lovelace, that way.