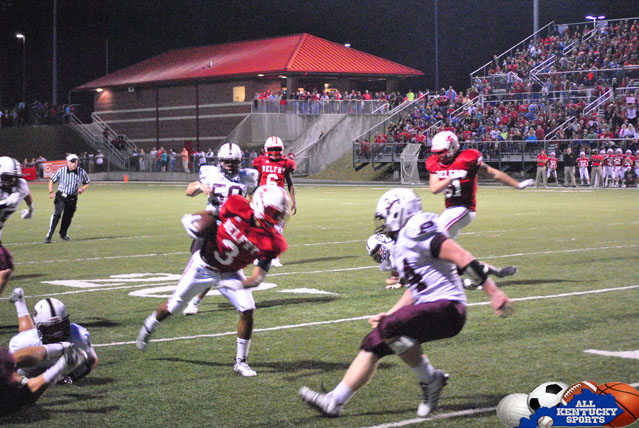 Chris McNamee’s Pikeville Panthers are among the top ten or so programs in Kentucky High School football regardless of classification. In fact, with the facilities we have seen in Pikeville, they may well be Kentucky’s premier program.

We have before told our subscribers and readers, and pretty much anyone else with whom we have come in contact, that classification in Kentucky high school football is pretty meaningless. Kentucky only really has two classes of football teams playing on Friday nights. You have your good teams and your bad teams. Very few would be described as “mediocre.” Pikeville is definitely one of the good teams and would be a formidable match for any Kentucky football team, no matter in what classification that team happens to play.

The Panthers have enjoyed quite a bit of success on the field to warrant such a flattering description. In just the last five seasons, they have played for the State Football Championship 3 times, winning 2, and have gone 53-14 over that period of time for a .79104478 winning percentage. Folks, that is straight balling-out by anyone’s conception of the definition of that colloquialism.

In order to continue to play at the 5-year level Pikeville has played over the 2014-2018 seasons, the Panthers have to perpetually re-stock the roster. Having a top-notch middle school program, which also perennially competes for the Kentucky middle school football championship, has helped in that regard. Developing quality freshman depth, which matures into tomorrow’s stars, is equally important. Well, enter Class of 2022 Bryce Dempsey, who perfectly fits the bill of quality freshman who is likely to mature into a tomorrow star player.

Dempsey is a prospect we love because he’s just a damn football player. He is 5-10 and weighs 190 pounds at present, which is pretty meaningless for freshmen. By next year, he could be the same size or he could be 6-3, 240 pounds, no way to know for sure. However, the 5-10, 190-pounder showed the past season he is quite useful at any size where he is likely to be deployed.

Bryce played a lot of MLB in JV football but found action on Friday nights, while a freshman on an 11-3, State Runner-up football team, at the tackle slots, both offensively and defensively. In looking at his different game by game highlights, several very positive play-traits leapt off our screen.

First at DE/DT, where we saw him primarily deployed defensively for the Panthers, he had excellent leg-kick and get off, firing out with really good pad-level, as if he’s been excellently coached (imagine that). We saw him effectively play the “Read Technique,” saw him “set the edge,” and saw him exhibit the ability to scrape down the line of scrimmage and make plays both in the middle of the line and in the offensive backfield. He looked to us to be a better penetrator than a read guy; but his ability to plant, read, shed, and make plays, without giving up too much ground will improve as he both matures and gets bigger, stronger, quicker, etc.

We were impressed with the offensive line highlights of him deployed at RT. He looked to us to run his feet well. By this, we mean he fired off, engaged the edge-defender, and continued to “pound the ground,” while remaining connected to the player he was blocking through the whistle. He looked, this past season, to be a mostly a first-level blocker, as we didn’t see him slide off and block second or even third level defenders much. That dimension of his game will grow, again, as he matures, gets bigger, longer, stronger, quicker, and faster.

Bryce Dempsey is an outstanding, Class of 2022, football player who would have been an every-day, every-down performer had he attended 85% of the other high school’s which fielded football teams in the commonwealth of Kentucky in 2018. Remember this about Pikeville; they had our top-2022 QB prospect in all of Kentucky (Isaac McNamee) and he didn’t play, other than mop-up duty, in 2018. How many programs could have seasoned a freshman QB who’s 6-3, weighs 210 pounds, and swings a howitzer from his right shoulder? There are some (like Pikeville, for instance) but not many.

We look for big things out of Bryce Dempsey as he will enter the starting lineup for the Panthers immediately, from game one of his sophomore year (2019), like is expected of a high school star/college prospect. We realize this may be the first you have heard of Bryce Dempsey; but, be rest assured, it won’t be the last.