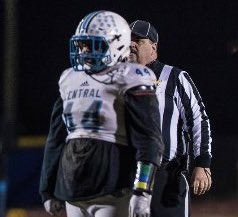 I bet I watched the video 100 times. It was from Team Kentucky Future Stars camp three years ago.

These weren’t ordinary offensive linemen charged with this chore either. These were two guys believed to be among the best along the offensive front in that graduating class.

It really was an offensive drill. In the drill the two linemen are supposed to drive the defensive lineman gapping them until one of the lineman overtakes the block at which time the other was supposed to climb and hit the LB which was sitting there.

Wasn’t it Robert Burns who wrote that “The best-laid plans of mice and men often go awry…(?)” Well, these two offensive linemen couldn’t move Thornsbury a single, solitary inch off the line of scrimmage.

The video had the offensive line coach chewing on these two offensive linemen and the DL coach bragging on Thornsbury. Over all the commotion I heard one voice. It was the voice of Kentucky Future Stars’ Director Ricco Hughes.

He was talking about Class of 2022, DT/NG phenom, Jacoby Thornsbury. He’s been “Big Baby” Thornsbury to me ever since.

It is the perfect nickname for a kid with a baby face and the power, sink, strength, leverage, and leg-kick of a full grown man. Big Baby has been on a tour of the area schools in Kentucky/West Virginia. He’s now back in Pike County and ready to star for a team which has enough talent on the roster to make opponents’ puke.

Thornsbury played his sophomore year at Mingo Central in West Virginia. Like he had done as a freshman, Thornsbury garnered several post-season accolades over there.

Now he’s at Pikeville High School for his junior season. Have you ever heard the saying “…the rich just keep getting richer?”

In what amounts to an embarrassment of riches, particularly on the 1A level of competition, Pikeville adds Jacoby Thornsbury to the roster for the 2020 season. This is one offseason away from adding the Sayers twins to solid the guard slots one summer ago.

That is two summers adding three players all of whom are 6-2 or taller and weigh 290 or better. All three of whom are the definitive players in their respective classes where they are planning to be deployed.

Now if there is a criticism of “Big Baby” we have heard from some scouts it is his taking plays off from time to time. Some of that is unfair, the film you are evaluating is from his freshman and sophomore seasons. However, as he continues to condition, and let me add 290 will be the lightest weight at which he has played since middle school, his wind will catch up with the rest of him.

Everyone agrees Thornsbury is perfectly dominating when “he wants to be.” We predict he will want to be much more in 2020 than he has any of the other two HS seasons he has played.

At the end of the day, and probably the end of this year, Jacoby “Big Baby” Thornsbury is going to be a name you will hear listed among Kentucky’s finest all over the commonwealth of Kentucky. Scouts will flock to Pike County to attempt to garner some love from Thornsbury in the hopes of signing him when his prep career is through.

Why not? It isn’t like there are many, many other good reasons to be recruiting Pike County anyway.