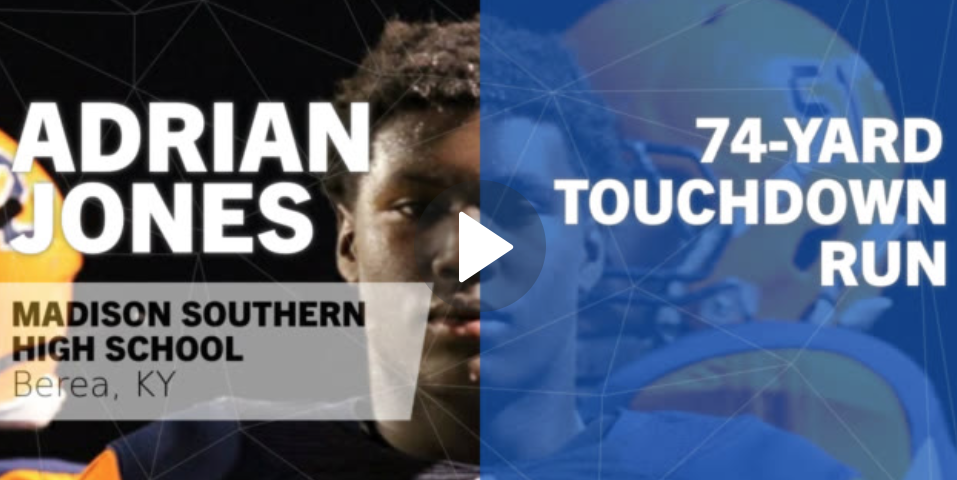 Madison Southern’s football program has a beautiful saying which couldn’t be more true. The boys from Berea, Kentucky are fond of saying “Champions are built on 1,000 invisible mornings.”

That aside, it is a true saying and beautifully put. Do you know the player who bests manifests that saying on their returning roster, and mighty well in our opinion, is Madison Southern’s superstar 2022 RB Adrain Jones.

Jones was the backbone of the ground game last year not named Tobias Storm. Of course they had hulking offensive lineman Duane Jackson along the front too in 2019.

Jackson is off to play football on Saturdays in the FBS-division for North Texas State University. Tobias Storm has also matriculated.

The only person to out-gain Storm on the ground, and score more rushing TDs, was Adrian Jones. Jones gained 1,394-yards, as a sophomore, on 135-carries in 13-games, scoring 19-rushing TDs.

Needless to say, with Storm having graduated, Jones will get more than a fraction over the 10-carries a game Jon Clark found him in 2019. Without Duane Jackson blocking for him, he may need the extra carries because over 10-yards per, against the teams they see in Class 5A, District 6, will be tough to repeat.

Coach Jon Clark still has to be stoked to be getting a RB returning the ilk of Adrian Jones. Remember too, Jones was just a sophomore last year, so he will look vastly different this coming Fall as a junior. That is the case with almost all juniors.

We will find out whether Jones has been spending his 1,000 or so invisible mornings, this offseason, getting ready to lead this team. We will see if he is prepared, to go forward in 2020, without Tobias Storm or Duane Jackson to carry any of the load.

Can he put this team on his back? Can he be “the man?” We don’t have any doubt. In the end, it doesn’t matter what any of us think.

You see, that’s the beauty about football; there’s no lying about it. You either did the work or you didn’t. We’ll all be able to tell as soon as they turn on the lights.