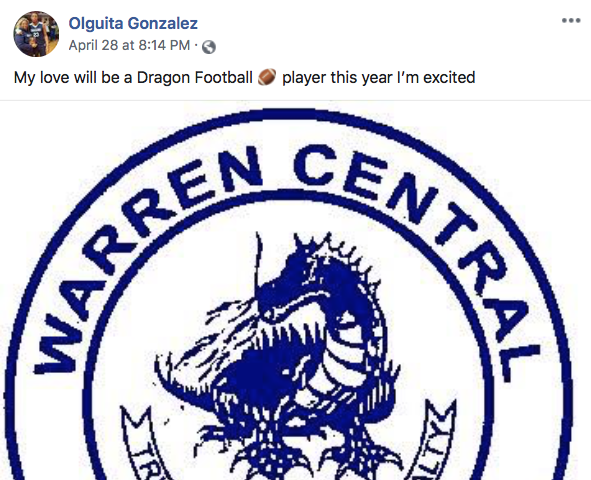 April 28, 2019 around about 8:14 in the p.m. was probably not a very important moment in your life as a reader of this article. It probably didn’t mean very much to a lot of people not having babies delivered, not enjoying an anniversary dinner, not celebrating getting a new job, nor celebrating a birthday with loved ones.

Though insignificant to many of you, it was certainly significant to a football program at a high school in Bowling Green, Kentucky. It may have been the very moment the Dragon football fortunes for the Fall of 2019 took an abrupt about face. Why? We thought you would never ask.

Look very closely at the guy to the left of this paragraph. He is Dre Boyd. The lady who posted to Facebook what we have attached as the Featured photograph for this very article is Ms. Olguita Gonzalez. Ms. Gonzalez is Dre Boyd’s mother.

Those of you who regularly follow Kentucky High School football may not attenuate much significance to the name “Dre Boyd.” However, go ask your buddies who are basketball fans about him. Ask them whether he possesses the type athletic ability to pretty much dominate any game he plays. Go on now…ask them.

You see, Boyd is one of the most explosive, dynamic, vertically-powerful, lengthy, and quick-twitch athletes in all of Kentucky. He is measured at 6-3 inches in height, he weighs a deceptive 200-pounds (deceptive because muscle is dense and makes even the slightly-built heavier than expected), and he has a wing-span of 79-inches (6’7″). Add to that his vertical leap of 44-inches and you can see a variety of ways he could contribute to any football team at the high-school or college level.

If you are a team on the Warren Central Dragon football schedule in 2019, you’re going to get a really close-up view of him. It’s a view your basketball brethren haven’t been enjoying.

We hear Boyd is going to get a look at QB. That would be fitting. He helped guide his basketball team this past winter to the final-four in Kentucky’s “Sweet Sixteen,” beating (among others) a very good 30-6 Madisonville North-Hopkins team to get there. Boyd, against a team noted for its size and physicality, led the Dragons with 15 points, 7 rebounds, and 3 steals. If he shouldn’t work out under center, he could be one tremendous WR/DB combo player and we expect to see him in the defense’s third level even if he does end up playing QB.

Dre Boyd’s adding football to his athletic repertoire, beginning in 2019, is an example of how Cary Fowler and William Unseld have the two programs collaborating toward each program’s being an elite one in their respective arenas. For Warren Central’s basketball program, it is a matter of maintaining its eliteness and, for the football program, it is a matter of regaining its former eliteness.

Either way, any program could do nothing other than improve adding an athlete with the physical dimensions and explosiveness of Dre Boyd. Athletes like him don’t come around too often. For the Dragon football program, neither do moments like April 28, 2019 round about 8:14 in the p.m.