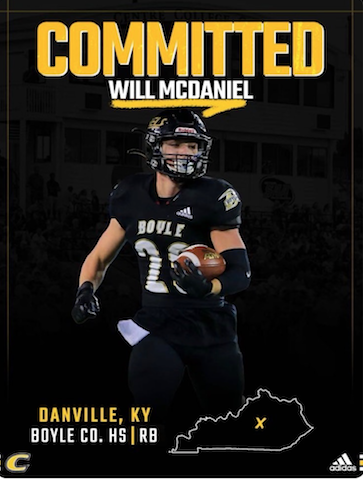 We have been covering on KPGFootball a unique pattern. The “small” school football programs seem to be benefitting from the pandemic’s effects on larger-school recruiting.

At least one media outlet in and around Owensboro, Kentucky has called Kentucky Wesleyan’s list of commitments and targets an in-state all-star team. Wesleyan has pulled, just recently, a commitment from VJ Anthony out of Louisville Male.

Georgetown College has commitments from some superstar, Kentucky high-schoolers like Trent Asher from Leslie County, and lead on a bevy of others. Union College continues to sign up some of the mountain-area’s best high-schoolers together with bigs like, Scotty “Bubba” Blythe from the western-end (Christian County High School, Hopkinsville).

Campbellsville has plucked some outstanding prospects both from Boyle County in Caleb Edmiston, OL, and on the western end of the commonwealth with a commitment from DE, Broc Bridges. There are more examples of this, but you get our point.

Yesterday, a team about which we have before written as being “hot” on the recruiting trail, Centre College, again struck recruiting “gold” in its pursuit of excellence. Centre pulled a commitment from the Kentucky Football Coaches Association’s Class 4A Player of the Year, Boyle County’s Will McDaniel.

McDaniel, played both running back in high school. It is believed he will be a RB at Centre College. McDaniel turned in strong enough performances as a high-schooler to convince any onlooker he was capable of playing on either side of the football at the next level.

Defensively, McDaniel registered 32-tackles, 5.5 TFLs, and recovered a fumble. The way he attached the line of scrimmage from safety, evidenced by the number of plays he made behind the line of scrimmage, gives you some idea about his aggressiveness, toughness, and willingness to run through contact between the tackles when in the backfield. Yes, these traits translate on both sides of the scrimmage line.

More so than what McDaniel clocked at some combine, McDaniel has “football speed.” We got the privilege of watching him play in person this year, and against competition boasting Division-1 offered prospects. We personally witnessed McDaniel’s gaining separation from defensive 2nd and 3rd-level players who reported both D-I offers and considerably faster 40-times than McDaniel.

We certainly believe McDaniel’s commitment to Centre, together with the many other commitments we above referenced, demonstrate a migratory pattern toward prime-time high-school players seeking out and committing to smaller, academically inclined colleges. It appears many Kentucky high-schoolers are intent on assuring both next-level placement and future professional job-security over waiting around and seeing if the larger schools free up some roster space as NCAA, February signing-day creeps ever closer.

With the NCAA permitting seniors to stay behind and get another year of eligibility, permitting transfers to move over to other member schools without penalty with many of them having multiple years of eligibility remaining, rosters are fuller right now than usual. This hasn’t left much space for incoming signees.

This is even more true when it doesn’t appear the NCAA will be giving member schools relief from imposed athletic scholarship limits. Not many top-flight prospects are appreciating much benefit in waiting around, hoping their number gets called. Who can blame them?