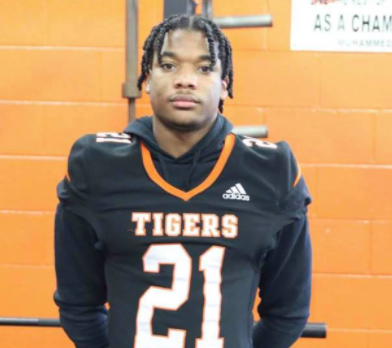 One of Kentucky’s top targets at the receiver position, Hopkinsville High School’s Reece Jesse, Jr., has announced his commitment to the Louisville Cardinals. With a family composed of lifelong Cardinals fans, this has to be both a source of excitement and pride for the Jesse’s.

We reached out to one of our former writers who coached this prospect in middle school when he formerly lived in Hopkinsville. Fletcher Long, now the Editor in Chief of the Jackson Times-Voice and serving on both our Editorial Board and many of our selection committees, told KPGFootball, “I told Jeese’s father, Maurice, when the kid was in the seventh-grade that, if he worked hard on his craft, that he was blessed naturally with many attributes physically defining many D-1 wide receivers.”

We asked him to describe those attributes he was referencing. “Even in seventh grade, Jesse had a lengthy frame and upper-level, vertical explosion combined with supple, soft, large, and receptive spiral depositories (hands). He caught balls for us at HMS, particularly vertically and particularly at its high-point away from his body, you don’t see many middle school kids catch,” Long explained. “He was (even then) long-armed, long-legged, with a short-trunk or torso,” Long explained.

“Jesse anatomically looked like he was headed for both a tall and long frame. He ended up framing out like I thought he would,” Long concluded.

Jesse is listed around 6-3, 200-pounds, but assets we regularly access around the Christian County area tell KPGFootball Jesse is closer to 6-4 with a wing-span around 79-80-inches. He is a 3-star ranked national recruit with both major services, Rivals and 247Sports.com, and has been consistently ranked among the top-10 overall prospects in Kentucky’s ’21 class.

He has made numerous All-State teams. He projects to make a few more yet to publish.

Jesse’s decision to join the Cardinal’s program reverberated all over the commonwealth. He had numerous D-1 offers which would have taken him too far away from his family for his liking. So he elected to play in easy driving distance to his home and in a city where he has many family members and friends to check up on him.

Jesse is an excellent student who will get tons of financial support in his effort to play at Louisville. Many prospects, not just Jesse, have been greatly hamstrung by the NCAA’s recent rulings on transfer portals, permitting seniors to stay back an extra year, and not granting schools any relief from overall scholarship limits. We’ve covered all of these issues exhaustively.

As a senior, Jesse caught 36 passes for 745 yards and seven touchdowns in 10 games for the Tigers. Jesse, in a full season prior to the COVID-19 global health crisis, had a tremendous year in 2019. Jesse caught 67-passes for 1,184 yards with 15 TDs while a junior.

Over the course of his career, where he leaves the Tigers’ program the leader in numerous key statistical categories at the receiver position, Jesse caught 118-receptions for 2,411-yards receiving with 24-TD receptions. What is striking is his averaging 20.4-yards per reception over this career. He also took one out of every 4.92-passes caught to the end-zone.

He has had a remarkable career. His career, like so many other seniors can claim, would have been even more astounding had he not suffered through a pandemic robbing him of an important camp/combine/Seven’s circuit between his junior and senior years and quite a bit of senior production.

Good luck to one of our favorites from across Kentucky and one of the finest at his position we were ever privileged to watch. We’ll be cheering for you.