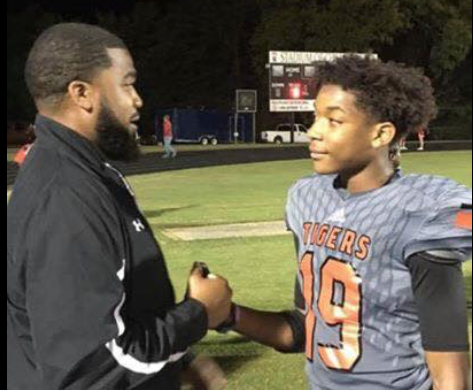 Reece Jesse, Jr. is a 6-4, 178-pound, long-armed, vertically explosive athlete tearing it up on the Seven’s circuit and on the gridiron. He has a 78-inch wing-span and a 38-inch standing vertical. We have before shown you video of his 360-degree, spinning, two-handed slam dunk, now hit this link and watch him Randy Moss this DB from a national 7 on 7’s tournament in Atlanta, Georgia this past weekend playing for Western-Kentucky’s BAGOS (Building on a generation of stars).

So, lets say one is a garden variety, 5-something-inched, defensive back playing high school football in Kentucky. Let’s say your coach has directed you to try to contain this lengthy, gazelle-like dynamo. What on earth are you going to do to get it done? What can you even attempt?

One strategy would be to get up into his chest and jam him at the line of scrimmage. You know, re-direct him…not let him get into the route…knock him off his path. I mean, how tough could that possibly be? We are talking about a receiver here. It’s not like he’s an accomplished power-lifter or anything. Hold on, buster, you just may not be armed with all the information you will need to solve this particular equation.

Reece Jesse, Jr. served notice this past Saturday that any attempts to get physical with him might be both futile and unsuccessful and will certainly be met with equal to greater consequences and repercussions. In what amounts to both a rare and strange anomaly, Reece Jesse, Jr. (as it turns out) is on the Hopkinsville Powerlifting Team!

What? Did I just hear correctly? Jesse is a power-lifter? Yessir, and one with whom to reckon in the 185-pound weight division.

The Kentucky Powerlifting Championships don’t draw the guys who play around in the weight-room. These are the elite of the elite who even show up to toss their hats into the title-ring. These are the big boys at each weight class. You can look at the combined, total-lifted numbers in each weight-class and see that.

When Hopkinsville announced who it would take to the State Championships, KPGFootball thought the Jesse kid being among the team members listed was some sort of mistake. How in the world is a kid with as long of legs and arms as this kid ever going to power clean, or so we thought, much less bench-press much of anything.

Well, looks can be very deceiving we have always heard. Jesse posted a combined lift of 460-pounds on Saturday; good enough to finish 9th in the entire commonwealth of Kentucky’s 185-pound weight class. Heck, he was 40-pounds, or twenty-per-lift-away from placing 4th. Jesse rocked 235-pounds on his bench press and then power-cleaned 225-pounds to compile his total.

A power clean of 225 pounds is what the big boys lift. Consider this, probably the finest heavyweight powerlifter in Kentucky history, DC Boone from Owensboro Apollo, just set the Heavyweight bench press mark of 475-pounds. Want to know what he power cleaned at the same meet? The same as Jesse…225-pounds.

Trigg County, the most storied powerlifting program in Kentucky, and owner of 12 team titles, lets you sign the weight-room wall when you hit 225-pounds on the power clean. They say that is when one becomes a man.

So, your big plan is to get in Jesse’s face and jam him at the line of scrimmage? KPGFootball would highly recommend you derive an alternate plan. You just may need a plan which won’t result in getting your DB killed…maybe something which has a chance of succeeding. Good luck, partner. By the way, we’re thrilled we aren’t you.