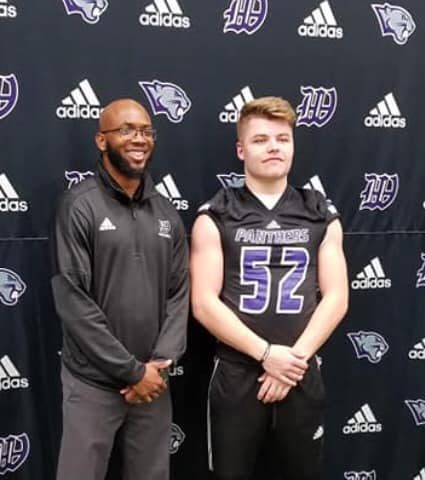 If you regularly read the site you know we just got back from covering the Kentucky High School Powerlifting State Championships in Cecelia, Kentucky on the campus of Central Hardin High School. One obvious reason for why we annually cover the event is we get reams of material from it, comprising literally scores of articles, for which we gather both subject matter and information. It’s a one-stop shop for us. Oh yeah, we also really enjoy the atmosphere and excitement.

Now, there are guys we cover whom we like better than others. We don’t generally mention the kids for whom we don’t particularly care (even though we will feature them regardless), at least we don’t call them out on this particular forum, because, unlike some of our competitors (Rivals-dig), we aren’t going to use our platform to bad-mouth kids (though we have no problem using it to bad-mouth Rivals).

KPGFootball sort of believes in the Karate Kid maxim that there are no bad students, just bad teachers, for those of you who saw the movie back in the 80s. One kid we have no problem discussing, as we like him very well, is Austin Mitchell from Trigg County High School.

Austin is a 6-0, and weighed in at the Powerlifting Meet at 203.1 pounds. He played both offensive guard for the Wildcats, in 2018, and MLB. Austin, whom we believe will be a fine player for Coach Craig Yeast at Kentucky Wesleyan in the coming Fall, projects as a line-backer for which he is plenty athletic, fast, and explosive to play at a high level.

Mitchell has been timed in the 40-yard sprint at 4.7 seconds. His vertical explosion buttresses his running that fast. His standing vertical leap is 33-inches. Austin is the State Powerlifting Champion for 2019 in the 205-pound weight class. The significance of winning that particular weight class is it is historically one of the tougher classes to champion. This past weekend, Mitchell benched pressed 295-pounds, power cleaned 250-pounds, for a combined lift of 545-pounds to win the crown.

Mitchell had impressive on-field production for the Wildcats in several defensive statistical areas in 2018, his senior year. Austin, in 10 games of action, had 36 total tackles, 11 tackles-for-loss, 3 quarterback-sacks, and recovered a fumble from his MLB position. Offensively, he helped to anchor an offensive front which ran for 1,733 yards from scrimmage and threw for an additional 1,524 yards to comprise one of the more balanced attacks anywhere in the western end of the commonwealth among Class 3A football teams.

Austin is fast. Austin is explosive. Austin is accomplished on the field on both sides of the football, where the two-way performer is headed to Kentucky Wesleyan to play in college. Austin is a Kentucky State Champion in his weight division in powerlifting. Austin is a gutsy athlete regardless of in what competitive arena he may be competing. However, above all of those things, Austin Mitchell is a super nice young man who was obviously well-reared and has rounded into a classy guy, a fine man, and someone it has been a joy to cover.

We, of course, wish him well but have no question he will do very well in life, either with or without the extension of good-tidings from us. Guys like Austin Mitchell tend to succeed. Isn’t it glorious when they do!