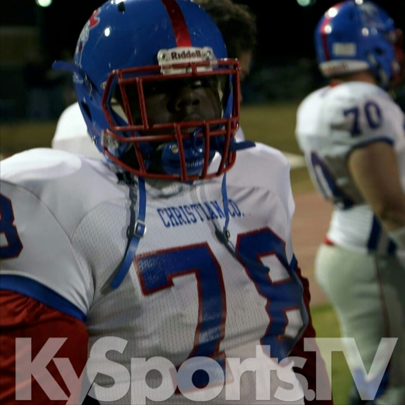 At KPGFootball, we don’t know where you threw down on the question of East Coast versus West Coast in the hip-hop game back in the day. Truth be told, we would probably be wise to stay out of that debate. It’s been years but no reason to spark back up that particular controversy.

We were unashamedly fans of Christopher George Latore Wallace though we realize that may not be the name which sounds familiar to you. He would be better known to most of you as either the Notorious B.I.G., Biggie Smalls, or even just Biggie.

Biggie wrote a catchy rap-lyric which went I love it when you call me big pop-pa; Throw your hands in the air, if you’se a true player…” I think bout that whenever I run into Christian County’s Jerome Big Poppa Smith. He needs to get those hands in the air because he’s a true player.

Now Jerome bears some resemblance to the late Biggie with the exception of the notorious part. You see the word “notorious” means widely and unfavorably known. While Jerome Smith is widely known, we have never heard the first unfavorable word spoken about the big fella. Truthfully, he is one of the nicest kids to have ever played football and power-lifted in the commonwealth of Kentucky.

That doesn’t make him any less formidable. Smith is only 5-6 in height and weighed in at the recent Kentucky Powerlifting State Championships at a robust 375 pounds. He played both offensive tackle and nose-guard for the Class 5A Christian County Colonels in 2018, his senior year.

Big Poppa Smith, as his highlights will certainly reveal, moves exceedingly better than most would have assumed when he exited the team’s bus. As for power and explosion, Jerome just finished 3rd in Kentucky’s heavyweight division at the 2019 Kentucky Powerlifting State Championships.

Smith, this past Saturday in Cecelia, Kentucky bench pressed 350-pounds and power cleaned 240 for a combined 590-pounds lifted. His total pounds lifted were good enough for runner-up as he tied Hopkins County Central’s Kaison Osbourne. However, where two lifters tie the position is forfeited to the lighter of the two, or the one with the higher coefficient lift to weight ratio. Unfortunately for Big Poppa, Osbourne weighed in at a svelte (for heavyweight powerlifting purposes) 292.2.

All of that being said, 590-pounds of combined lift (bench press + power clean) is a fantastic total. A heavyweight lifter power cleaning 240-pounds evinces some power, explosion, and agility to slide Big Poppa’s frame under that bar and bring it safely to his chest.

Over the years getting to watch Jerome Smith play football and compete as a powerlifter, and he has finished top-5 at the last two Kentucky Championship meets, we are going to miss him competing for his beloved Colonels. Smith has an engaging smile and personality. Smith is fun to be around and a cool hang as we would have said back in the day. We even have it on good authority he’s an accomplished dancer.

KPGFootball is gonna miss us some Big Poppa. So, Jerome, just for us, one last time, throw your hands in the air because you’se a true player!