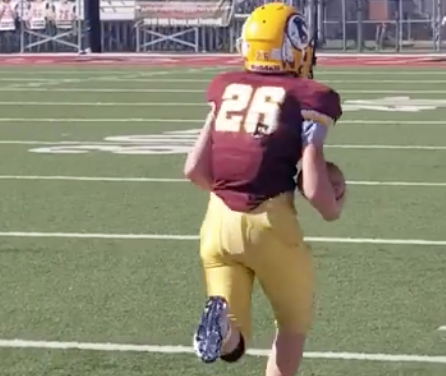 Man, this all seems so utterly familiar. Where have we before seen this? A kid named Gough; who comes from Owensboro, Kentucky; wears number 26; doubles as a running-back/linebacker; and completely dominates his competition on the football field. If you are a fan of Kentucky, middle and high school football, and particularly where you are a fan of this website, I think you know exactly from where we have seen this previously. Yessir, Ethan Gough is Austin Gough’s little brother. Just like his older brother, the Class of 2025 prospect whom has positioned himself among the elite prospects in the Commonwealth of Kentucky for his graduating year, is tearing it to pieces out there. If you don’t believe it, just watch this run. Yep, I would say that boy is all Gough.

Built eerily similar to his brother Austin, Ethan, who is a 5-2 and 115 pounder, has exceptional balance, squares up well as he explodes into the defense’s second level, is hard to tackle, and turns on the jets to separate from both 2nd and 3rd level defenders. Also, like Austin, he is a force to both fear and with which to reckon aligned at linebacker. Finally, like his brother Austin, he makes every team on which he plays (regardless of the sport) a better team for his having been on it. The Redskins in Owensboro, Kentucky, just this past week-end, polished off a 9-0, perfect season.

Next year, Ethan Gough will take his place on the roster of one of the most successful middle school programs in the Commonwealth at Owensboro Jr. High. It is the same program for which his brother played before matriculating to Owensboro (Senior) High and distinguishing himself as the top college prospect in the Class of 2021. Austin enjoyed unparalleled success as a middle school player being named to the Bret Cooper All-American Team, being selected a 2X Kentucky Future Star, winning Offensive MVP in the Tennessee-Kentucky Classic in 2016, and being selected twice to Team Kentucky FBU Elite. Those make for some pretty difficult shoes to fill. No one can completely forecast the future of any young player, but the early returns suggest there is no reason to believe this edition of the Gough football family will be wanting, in any way, in comparison with his brother. In fact, and this is a scary thought, there are those around Owensboro, Kentucky who tell KPGFootball that Ethan is a better football player, at this stage of his development, than his brother was as a sixth grader.

All of this being said, we want to congratulate the Owensboro, KFL Redskins on its perfect season and we want to congratulate Coach Brown on being fortunate enough to garner the privilege of tutoring another Gough as Ethan braces and prepares for middle school football. Oh yeah, Team Kentucky, since you have a sixth grade team which competes in the FBU National tournament, you might consider sending an invite to Ethan Gough in Owensboro, Kentucky. After all, you already have the address.