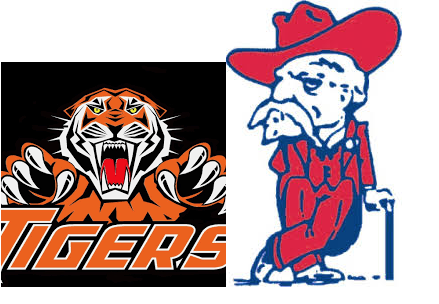 There maybe hasn’t been a more stunning nor demonstrable appearing improvement than the improvement HMS has undergone over the course of the 2018 season. The HMS team which lost week one at Caldwell County, a game in which Caldwell benefitted from recovering numerous on-side kicks in route to the rout, left observers wondering whether HMS could win a game all year. After incredibly hard work turned in by both the players and coaches, the Tigers are entering the KYMSFA Playoffs, after a runaway home win, having not lost since it dropped a game at Logan County 16-0. The 6th seeded Tigers will head to Franklin, Kentucky to play Franklin-Simpson on October 6 to attempt to earn a chance to either come home and play Adair, or travel to Elizabethtown to play TK Stone, depending on the outcome of that game.

However, before hitting the road, the Tigers have a little business to take care of at home. Tomorrow, HMS gets an opportunity for redemption against its cross-town rival by showing the home folks both how much it has improved and that it is not the same team which lost to CCMS, 30-0, approximately a month ago. HMS, which is now 4-3 on the year after bullying a hapless Russellville Middle School, on 8th grade night, 48-0, gets a re-do versus undefeated Christian County Middle School. The game will take place at the Stadium of Champions, October 2, 2018, with the JV kicking at 5:00 p.m. and the Varsity to play thereafter.

A HMS win here sends a strong message both to the play-in opponent, Franklin-Simpson, a 3 seed, and to a possible matchup with TK Stone in Elizabethtown, in the second round, assuming TK Stone can overcome seventh seeded, Adair, in its first round game. Hopkinsville Middle School lost the Regional Championship game to TK Stone in 2015 and then lost to Stone, again, in 2016, this time in Lexington, Kentucky in the State Semis, 38-36. These are two teams whom have grown accustomed to seeing each other this time of year. Owing to HMS’ being seeded 6th, the highest seed it has ever drawn in the KYMSFA playoffs, this time Stone crosses the Tigers’ path a little earlier (2nd round) than usual.

Of course, the Colonels have a lot for which to play too. Many people in Colonel-ville are quite incensed it drew a 4 seed in the Division I, Region I, bracket behind Bowling Green, Logan County, and South Warren. The Colonels await the winner of 12th seeded Graves County versus 5th seeded, McCracken County, which the Colonels will get to play in Hopkinsville, being the higher seeded team. Now, for those who don’t know, here is how seeding works: a Division 1 win during the regular season is worth 3 points, Division 2 is worth 2 points, and Division 3 is worth a point. The committee takes your wins, adds up the points, and seeds you from highest points to lowest. KPGFootball believes the only reason the Colonels aren’t seeded higher is its only having played 6 regular season games, even though they have won them all. The game with Hopkinsville being played tomorrow, with the tournament already seeded, is meaningless visa vie seeding. However, as has been amply recorded throughout regional history, no game between these two rivals is ever truly meaningless.

So tomorrow night we will go to the Stadium of Champions to watch two teams about to embark on Championship runs. We will be there to see both how good the Colonels are and how much better the Tigers have become. KPGFootball expects this outcome to be considerably closer than the first time the two met. Why? Well, we’ll tell you why. We think Logan County is every bit as good as Christian County Middle School, and Logan was ahead of HMS only 8-0, deep into the second half, before scoring late to widen the margin to the final 16-0. The body of evidence we have seen, leads KPGFootball to believe the Tigers have made significant strides defensively and that the defense is good enough to keep the Tigers in the ball game. We believe the offense may be hitting its stride as the Tigers come down the home stretch, as the 48 points it put up against Russellville demonstrates. We also believe that the outcome in one game means little to the outcome the second time two teams play. Plenty of examples of this phenomenon exist. For instance, last year, HHS lost to Logan County 13-12 in the regular season and beat the same team, a few weeks later, 43-7, in the second round of the playoffs. Also, South Warren lost to Bowling Green High School during the regular season in 2017, 43-7, on October 20, only to come back and beat the Purples, November 17th, 28-21.

Finally, we don’t know who wins tomorrow. People who observed the first contest saw two teams not even in the same league. What we don’t know is whether that is still true of those two teams. Teams improve, players improve, fortunes change, and match-ups, which weren’t close one time, can completely about face a second time, depending on a variety of factors. All we know is the only way to discover which one of these truths turns out to be the most veracious, is to show up tomorrow night and see for yourself. We’ll see you there!