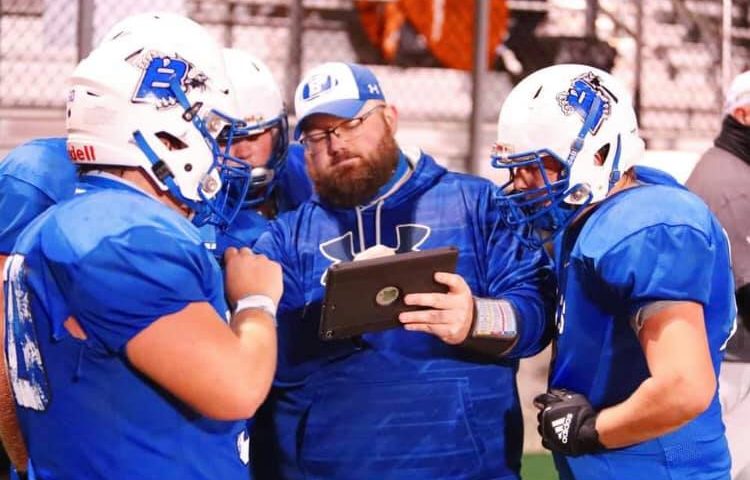 It was win or go home, Friday night in round-one. Playoff performances make more of an impression on us at the magazine than regular season production.

Below we will detail a few of the outstanding games turned in by some of Kentucky’s top high school football players. Encourage your coaches to get those statistics on the KHSAA website for us so we can know about your performance, or have your coach message the website with any statistics which haven ‘t yet been reported.

Breathitt senior, Lane Weddle (2021) has been referenced as the “Forrest Gump” of Kentucky High School football. The reason? Well, it is because he is so good at so many things.

Friday night’s first round playoff game with Knott County seemed to put those skills on full display. Weddle ran the football 9-times for 141-yards and a TD. He caught two passes for 40, both of which resulted in TDs. He also returned an interception 72-yards for a “pick-six.”

This was in addition to his responsibilities as both Breathitt’s place-kicker and punter. Wow, this kid is quite a football player. Breathitt advanced 66-26 and will face Leslie County in the second round.

QB, Orry Perry (2021), who we love around the magazine by the way and believe he may well join us on staff one day, had a very efficient night in West Carter’s opening 36-6 conquest of Prestonsburg. Perry was 10 of 14, for 138-yards passing with 2 thrown TDs. Backfield mate, Leetavious Cline (2021), had his normal outing. Cline rushed the football 15-times for 156-yards with 3-rushing TDs.

William Long (2021) had quite a night for Breathitt County in spite of the fact he was doubled and often even triple-teamed every play. Not to even mention the offense runs away from this target of every opponent’s scouting report. Oh well, that is the life of a two-time, high school all-stater.

The former “winner” of the Mingua Beef Jerky Award, Herald-Leader Hundred designee, two-time first team All-Stater (AP), and Centre College commitment had 2-tackles, 1of which was for a loss, 1-forced fumble (on a play where he blew up the center completely forcing a high and difficult to handle snap which was botched by the QB and subsequently fumbled), and a whopping 5-QB pressures. Of the five pressures, one resulted in an intentional grounding call at key moment early in the game and the other resulted in a 72-yard, pick-six retuned deftly to pay-dirt by the ubiquitous Mr. Lane Weddle.

In addition to those defensive contributions, he had his usual fantastic game at offensive center where he is Kentucky’s definitive player at that all-important position. Long anchored an offensive line consisting of James “Swamp Dawg” Ogans (2023, LT), Jason Perry (2024, LG), Michael Hudson (2023, RG), and Teegan Smith (2022, RT and KPGFootball All-stater last season as a sophomore). Behind this new version of the Big Blue Wave, Breathitt had its most productive offensive output of the season.

The Bobcats gained 379-yards rushing on just 27-carries (14.04 yards per carry), 5 of the 27 carries going all the way. Jaylen Turner was efficient throwing the football, going 6 for 9 for 97-yards with 3 TD passes. Turner on the ground, carried it 6-times for 85 yards and 2 of the 5 rushing TDs. That is how a team scores 66-points.

Kaiya Sheron (2021) hadn’t played, going into Friday night’s marquee game in the 2A classification against Danville High School, in 5-weeks. The Kentucky commitment and Somerset standout at QB showed there was no rust settling on him.

Kaiya completed 19 of 26 passing attempts for 386-passing yards whilst throwing 3-TDs. He also contributed 91-rushing yards with 2-rushing TDs. Finally, he turned in another superior outing defensively, as a two-way star, for the classification’s defending champion.

Somerset beat Danville 48-14. They have an appointment in Lexington, Kentucky this coming Friday night against the classification’s top-ranked team and overall 1-seed, LCA.

Talk about having a big night, Malachi Rider (2024), a freshman, had one for the ages against Trigg County on Friday. Rider carried it 11-times for 274-yards with 4-rushing TDs. He scored 24 of the team’s 53 total points. The mighty, and traditionally rich program known as the Blue Tornado, ended Trigg County’s season 53-21.

Rider, the leader in the clubhouse for the KPGFootball freshman All-State team at RB, has 727-yards on the year in 73-carries, 8 of which have been for TDs. He has averaged 103.9 yards rushing a night over Paducah’s 7-games. Rider, defensively, has 19-tackles and a fumble recovery from his LBer slot. Rider, No. 29, is the “real deal,” as people are fond of saying.

Former winner of the Mingua Beef Jerky Award, Isaac Dixon (2021) demonstrated why he is getting more and more buzz. Dixon had 3-carries against Magoffin County for 115-yards and 3-TDs. He caught a pass (I know, right? Belfry threw a pass!) for 54-yards and another TD. The defending 3A KHSAA football champions rolled into the second round with a 54-12 beat down of Magoffin.

Meade County’s JJ Richardson (2021) a tremendously undervalued player in his class, had a night in Meade County first round game in the 6A classification. The senior DB/WR, sporting the 3.7 GPA, caught 7-passes for 188-receiving yards and a TD. On defense, Richardson had 2-interceptions.

Richardson is among the leaders in the 6A classification with picks this season. In addition to that, he has around 400-receiving yards in his past 3-games. Meade beat Central Hardin in round one, 21-9.