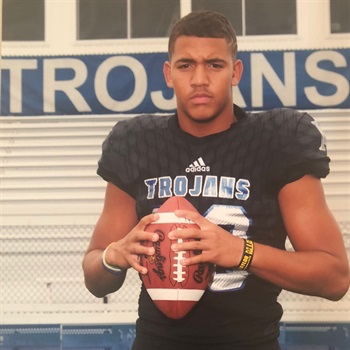 First of all, North Hardin has a very good football team. Coach Thompson’s Trojans finished 9-3 in 2018, playing in Kentucky’s 6A classification, the 2nd district. The Trojans also boast two of the best prospects in their respective classes in KPGFootball All-Staters, Octavious Oxendine (DL, 2020), and LaVell Wright (RB/DB, 2021).

They have more than just those two players, naturally, as they have another budding super-star who would have made our sophomore All-State football team if linebacker wasn’t the team’s deepest position. Matter of fact, we have no qualms at all saying he is an All-State caliber performer whose best football is still ahead of him. Before everything is said and accounted for, we believe he will be one of 2021’s premier football prospects anywhere in Kentucky.

In an article written by Chuck Jones with the News Enterprise, linked here, Lunz was named the Area Defensive Sophomore of the Year playing in an “Area” which boasts two KPGFootball All-Staters, JJ Richardson (DB, Meade Co.) and Camden Williams (WR, E-town High). Besting either of those two players is quite a testament to one’s ability, as KPGFootball will happily attest.

Lunz is 6-2 and weighs 215 pounds, up from 190 where he played during his sophomore season. In 2018, Michael had 101 tackles, 55 of which were solo-stops, with 12 TFLs, and 2 forced-fumbles. In watching his highlights, we noticed he closed on the football aggressively and blew-up blockers as he scraped down the line of scrimmage making plays. He was deployed, inside and out, at the LB position and filled both aggressively and violently meeting plays in the hole. We saw, among his highlights, evidence of his being extraordinarily adept at tackling ball-carriers in space.

In the Jones, article (above linked), Lunz’s coach, Brent Thompson, was quoted as saying he looked for Lunz to add both speed and strength, this offseason, for his play to reach the elite level all believe well within his physical capacity. Michael Lunz is addressing that very thing, this offseason, by enlisting the services of super-trainer, Corey Taylor, with Corey Taylor Sports Performance (CTSP). Taylor assures KPGFootball the top of the list is where Lunz will end-up, provided he continues to put in the effort he has to-date.

Michael Lunz has all the tools anyone could hope to see in a big-time linebacker prospect, said Taylor. He’s long, explosive, powerful, quick, and agile, with a huge upside. His continued training, with CTSP, will heighten that which he has; while honing that which he can become, so long as he continues to travel the path and continues to work our system. Taylor went on to say, God has given him so much physically and mentally to make him a football star. CTSP is committed to insuring he fully develops as an athlete into realizing every benefit the good Lord intended for him.

KPGFootball will continue to monitor this situation with Michael Lunz as we prepare to publish a top-player’s list of 2021s before the kick-off of the 2019 football season. We have our eye on this particular linebacker and fully expect he will continue to climb our list as he both develops and trains. Before long, who knows, he may be at the top of everyone’s list!