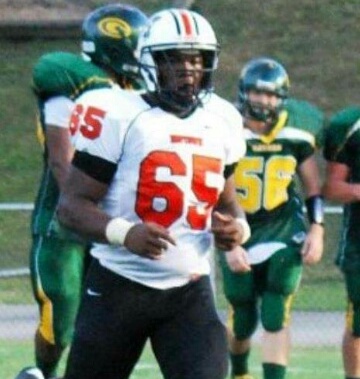 It is only fitting on the last day of “Black History Month” and only 2 and 1/2 weeks away from the 39th Annual, Kentucky State Powerlifting Meet, that we stroll down memory lane and commemorate a former great football player and powerlifter. Today, we will take a look back at the football and powerlifting accomplishments of the great, Donovan Bussell, Class of 2013.

Donovan Bussell’s name comes up every year at the annual Kentucky High School Powerlifting Championships. Why shouldn’t it? He owns two long-standing powerlifting records at the weight-class he practically owned and in which he was a multi-year State Champion, the 250-pound weight class.

In 2013, Donovan bench pressed 365-pounds, and power-cleaned a 250-pound weight class state record of 315 pounds. This set the table for his state record combined lift total of 680-pounds.

William Long, the returning State Champion at 250-pounds in powerlifting, which he won in 2018 as a 15-yo freshman in HS, arrived for the Border Brawl in Paducah weighing 253.3 pounds. Lifting as a heavyweight, Long bench-pressed 405 pounds and power-cleaned 255 for a combined lift of 660-pounds to win the meet’s heavyweight division, by 30 pounds.

One reason for Long to make every effort to lose the 3.3 pounds is Owensboro’s D.C. Boone (Apollo). Boone, a 6-2, 320-pounder, has recorded a 455-pound bench-press at a meet this year at Apollo and that lift had considerably more weight left in it (as did Long’s press of 405). KPGFootball would not be surprised to see Boone press 475-pounds, or even more, in Elizabethtown. That would shatter Taylor McGee’s Powerlifting Championship Meet record of 435-pounds set in 2006 (Trigg County).

Regardless of what William Long does or doesn’t do in the weight-division for which he will be defending his Championship, Long will not (this year) erase the Bussell power-clean state record of 315 pounds set in 2013. Long’s efforts also will only add, and not subtract, luster to the legend that is Donovan Bussell’s legacy. Bussell remains one of the Commonwealth’s all-time greats in powerlifting history, and you might not be too surprised to learn, was quite a football player on top of it.

Bussell’s last season was 2012 playing for the Tigers. HHS, admittedly, was not a very good ball-club in 2012 which, as always happens, overshadowed the fact the team had some individually fine players.

While, the Tigers were 3-7 and got smoked by Warren Central, 67-7, in the KHSAA playoff’s first-round, Donovan Bussell, a two-way lineman who was primarily deployed on offense, anchored a front which paved the way, in ten games, for the team to gain 2,428 yards in 401 carries. Hopkinsville, with Bussell along its offensive-front, scored 21 rushing TDs, averaged nearly 6.1 yards per carry on the year, and boasted two close-to-1,000-yard ball carriers in the backfield in Dee Killebrew (81 Carries, 915 yards, 10 rushing TDs) and Zach Atkins (127 carries, 842 yards, 8 rushing TDs).

Bussell was no slouch playing along the interior defensive-line either, thought most of his snaps were reserved for offense. Bussell still registered 28 tackles, 22 of which were solos, collected 5 QB sacks, and forced a fumble.

As you can easily see demonstrated here, Donovan Bussell used his strength, power, and incredible explosion well to provide the Tigers a prolific offensive ground-attack in spite of the roster being lacking, talent-wise, in many other areas. We hope you enjoyed this look back at a former great, two-sport athlete, and multiple State-Champion, Donovan Bussell.

KPGFootball looks forward to the up-coming Kentucky Powerlifting Championship Meet and what may amount to an exciting day filled with record-breaking performances. We hope to see you there…